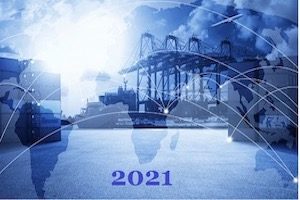 A new year, a new administration, and new trade initiatives.  Well…at least 2 out of 3.

Let’s take a look at some import and Customs subjects, then turn to export controls.

A major trade issue in the last few years has been the special Section 301 duties on Chinese products.  Most of the granted exclusions expired on Dec. 31.  Will the Section 301 duties be continued under the new administration?  For the near future – probably yes.  The Biden administration has already signaled that it will work with allies to address China trade issues.  When that will happen and what form it will take is TBD.

A related issue is the case filed in the U.S. Court of International Trade challenging the Tranche 3 and 4A 301 duties on China.  Approximately 3800 companies have joined this case.  The Government has moved to dismiss.  This case will likely come up this year and it will be interesting to see how it goes.

The Section 232 duties on aluminum and steel may be removed in whole or in part.  This is due to a desire for better relations and cooperation with our trading partners.

Many products and companies in the Chinese province of Xinjiang have been subject to sanctions – especially Forced Labor laws which can result in prohibition of the imports.  This will not subside and will probably increase in the coming year.  Companies having suppliers located in Xinjiang may need to look for new sources.

The U.S. and European Community have also been at odds with special tariffs arising out of the World Trade Organization decisions on Boeing and Airbus subsidies.  Additional tariffs were to be imposed on certain French products in January, but this action has been postponed.  Importers on both sides of the Atlantic may be able to hope for some relief on this issue.

The U.S. and post-Brexit United Kingdom have initiated talks on a free trade agreement. Don’t expect any significant progress on this in 2021.

The Generalized System of Preferences benefitting developing countries also expired on Dec. 31.  It will require Congressional action to be reinstated.  That may happen, but not until later in the year.  In the meantime, CBP says to put an “A” in front of eligible HTS classifications to be able to file retroactive claims when GSP is reinstated.

GSP may be renewed as part of the Miscellaneous Tariff Bill (MTB).  An MTB was proposed in the last Congress, but died a natural death when no action was taken before the term of Congress expired.  Look for a new MTB to be introduced later this year.

The Bureau of Industry and Security (BIS) has increased restrictions on exports to China, Russia and Venezuela.  The agency created a new Military End User (MEU) list and added many more parties to the Entity List.  Barring some major policy or regime changes, these lists will grow in the coming year.

BIS is working on new export controls on “foundational technologies.”  The agency published an Advance Notice of Proposed Rulemaking in the Federal Register last year.  It received a lot of pushback from industry; however, BIS plans to publish a Proposed Rule this year.  Expect more controversy and pushback when that happens.  A Final Rule – if there is one – probably won’t happen until 2022.

Both BIS and the Directorate of Defense Trade Controls (DDTC) removed the special status of Hong Kong last year.  It is now treated as part of China.  This change will become permanent.

DDTC published its regulatory agenda for 2021.  There are two major changes coming to the International Traffic in Arms Regulations (ITAR) this year.  The first is a reorganization of the ITAR to put license exemptions in a single section.  The second is a reorganization of the definitions in Part 120 for clarity and ease of use.  Both changes will be welcomed by the trade.

U.S. Customs & Border Protection (CBP) has been operating under an Acting Commissioner for a while and this will likely continue a bit longer.  The CBP Commissioner is nominated by the President and confirmed by the Senate.  Both have their hands full for the time being.  Will the new Commissioner be a woman?  Will it be an industry person or someone from the government?  You will have to wait a few months to find out.

The President has nominated Gina Raimondo as Secretary of Commerce.  She is currently Governor of Rhode Island.   As Secretary, she will oversee BIS, the Bureau of Census and the International Trade Administration.  She is viewed as a moderate and has previous business experience as a venture capital executive.

Katherine Tai has been nominated as the U.S. Trade Representative.  She was formerly Chief Trade Counsel to the House Committee on Ways and Means.  Ms. Tai is an Asian-American and speaks fluent Chinese.  She has also been a past critic of Chinese trade policies.

It is expected that Gina Raimondo and Katherine Tai will be confirmed by the Senate.

From here it looks like trade in 2021 will be more of the same – and more.