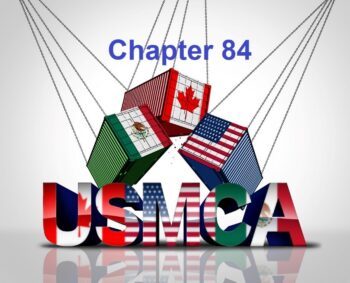 The United States-Mexico-Canada Agreement (USMCA) entered into force on July 1, 2020.  The new agreement is similar to NAFTA in many respects, and the commitments that pertain specifically to machinery, equipment and computers in Chapter 84 have not changed very much, with the exception of the rules of origin calculations for motor vehicles and parts, which impacts several categories of goods in Chapter 84.  In addition, there are more chapters involving Customs matters than under NAFTA, which also impacts how Chapter 84 goods are treated.

Chapter 84 covers machinery, apparatus, and equipment.  It has broader coverage than most chapters of the HTS and is the subject of frequent changes at the international level to due rapid technology change.  No major changes have been made as to the coverage of machinery in the market access chapter, but the qualifying products under the rules of origin and certification of origin are now more complicated than under NAFTA.

A good is “originating” if it is:

(i) produced entirely in the territory of one or more of the Parties;

(ii) one or more of the non-originating materials provided for as parts under the Harmonized System used in the production of the good cannot satisfy the requirements set out in Annex 4-B (Product-Specific Rules of Origin) because both the good and its materials are classified in the same subheading or same heading that is not further subdivided into subheadings or, the good was imported into the territory of a Party in an unassembled or a disassembled form but was classified as an assembled good pursuant to rule 2(a) of the General Rules of Interpretation of the Harmonized System; and

and the good satisfies all other applicable requirements of this Chapter.

The general rule for goods of Chapter 84 to originate in the USMCA territory requires a change in tariff subheading or a change from any other heading, provided there is a regional value content of not less than:

(a) 60 percent where the transaction value method is used; or

(b) 50 percent where the net cost method is used.

ADP Machines:  Note that there are special rules of origin in Table 2.10.1 for automatic data processing (ADP) machines, in Subheading 8471, known as computers to the public, and those rules supersede the general rule.

Automotive rules of origin require higher levels of North American content than in NAFTA, to attract production and sourcing in North America. The governments hope to strengthen the North American production platform, reducing red tape and increasing the use of North American parts, steel, and aluminum.  The auto sector has been a model for free trade since the original Auto Pact between the U.S. and Canada, signed in 1965.  More robust rules of origin for the auto sector will help keep the benefits of the agreement in North America and diminish incentives to make investment and sourcing decisions based on the availability of low-cost labor. Specifically, the new agreement includes:

All three of the government Parties to the USMCA are dealing with the new certification or origin requirements that differ from NAFTA substantially.  There is no set form for the certificate, a major change in itself.  In addition, origin claims may depend on the value added in the assembly process and how it is calculated.  Audits are likely as the agreement is fully implemented, and the new rules on customs administration and trade facilitation are implemented through the Uniform Customs regulations, (see:   https://content.govdelivery.com/bulletins/gd/USDHSCBP-2936ab7?wgt_ref=USDHSCBP_WIDGET_2

Companies dealing in products provided for in Chapter 84 will need to pay close attention to the valuation rules and calculations in order to ensure compliance in the heightened scrutiny as the agreement supplants the NAFTA.