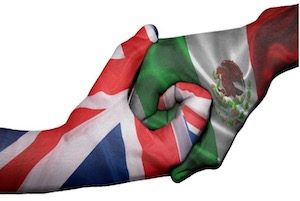 Five years ago, the United Kingdom (“UK”) decided in a referendum to leave the European Union (“EU”). Negotiations began for the UK to leave the bloc in an environment surrendered by uncertainty for some and optimism for others. The truth is, that nobody knew of the actual consequences that the decision would have on how this new trade scenario would affect the dominant position of the UK. The transition period for the UK to leave the EU ended on December 31, 2020, at a time when the Covid-19 pandemic was hitting the British Island and the effects of the Brexit could not be measured precisely. However, the Trade and Cooperation Agreement (“TCA”) between the UK and the EU entered into force showing the necessity of the UK to develop new trade relations and trade partners, as it could no longer benefit from the agreements that the member states have. This article is a continuation of our series of UK-Brexit and this time, we are analyzing the trade relationship between Mexico and UK.

As you may have seen in previous articles in this series, the UK is negotiating FTAs with different allies. These FTAs will increase UK trade potential and will help mitigate the damage to its domestic economy during this transitional period. Now, UK’s trade strategy seems to be focused on negotiating bilateral trade deals with the Asia-Pacific region, but not forgetting other strategic Central America partners. On December 15, 2020, the Mexico and UK Governments signed the UK-Mexico Trade Continuity Agreement.[1] The purpose of this Continuity Agreement is to avoid the imposition of the WTO´s most favored nation tariffs as a default measure that would otherwise have become applicable after December 31st, 2020, when the European Union-Mexico Global Agreement stopped applying in the UK. Recently, the agreement has been approved by the Mexican Senate and was published on June 1, 2021, on the Mexican Official Gazette (Diario Oficial de la Federacion), entering into force on that same day. This will particularly benefit the textiles, automotive, pharmaceutical, agriculture, food and drink industries, and other manufacturing industries, sectors where the UK has high trade volume with Mexico.

The continuity agreement includes provisions on:

Importers in the UK should know that they can now benefit from preferential tariff rates for bilateral trade in goods between the UK and Mexico providing they meet the Country-of-Origin requirements.  Additionally, Mexican importers can also apply for preferential treatment, provided the goods qualify as originating and that they are shipped directly from the UK to Mexico.  Under certain conditions, transshipment through the territory of nonmembers countries may be accepted.  Regarding the Country-of-Origin Determinations, unless you are permitted to provide an origin declaration, you will need to complete a certificate of origin to claim preferential treatment. The UK continues to use the EUR1 format for movement certificates with trade partners that have mutual FTAs with the EU including Mexico. These movement certificates are identical to those previously in use, but the place of origin on the certificate is now marked as the United Kingdom instead of the European Union.

Mexican importers can also request preferential treatment by attaching to the Mexican entry summary form (pedimento) a EUR.1 certificate that must have the correspondent sequence number and be stamped/sealed by the UK customs authority.  In certain cases, the MX importer can instead include an affidavit onto the invoice issued by the UK exporter regarding the origin qualification of the goods.  The MX Customs authority may reject the certificate or invoice when it considers the customs records are not in compliance.  However, MX importers and their customs brokers may file a ruling request regarding the completeness and correctness of the certificate.  Among other considerations, depending on the value of the goods, noncommercial importations may receive preferential treatment without the need to attach a certificate or invoice with the affidavit.

MX importers are required to complete, submit and maintain the corresponding customs records and evidence of origin in accordance with the MX Customs regulations.  Meanwhile, UK exporters shall maintain the records evidencing the origin of the goods for a period of 3 years going back from the date when the certificate or invoice with affidavit were issued.

MX Customs may implement audits to confirm the authenticity, validity, correctness, origin, and compliance of the certificate or invoice with affidavit, and may deny the preferential treatment when the information or documentation is not furnished as requested or is noncompliant.

Since day one, the TCA allowed Mexican-based companies to continue to export their products at advantageous rates, but while Mexico got immediate tariff concessions, UK exporters had to wait until all domestic regulations were agreed upon in Mexico to receive the same treatment. Due to these delays and the unfair treatment that many exporters alleged, Mexico implemented a tariff rebate program in early June 2021. This means that any businesses that have paid tariffs on goods that would attract preferential treatment under the agreement will be able to obtain a refund. If you have paid these extra tariffs, you should consult with your legal counsel regarding the process for obtaining these refunds.

While officials from both sides of the Atlantic Ocean were still discussing the implementation of this agreement, the EU signed a more generous and comprehensive deal between its 27 members states and Mexico.  This is important because the UK’s trade deal, which was meant to replicate the existing EU deal with Mexico, will now face stiff competition from EU countries, who have negotiated better terms to sell their goods and other products to Mexico. This has raised some concern among UK’s Trade Community as they are starting to see how EU-based competitors are likely to benefit from a significant competitive advantage in the Mexican market. It is well known that for many UK companies, Mexico is used as the entrance for the bigger LATAM market.  A significant reduction in their presence in Mexico can affect their prospective expansion through Central and South America which can affect their operations worldwide.

In response to this EU-Mexico Agreement, the UK and Mexico committed to begin negotiations on a new ambitious and modern UK-Mexico Trade Agreement that is expected to conclude within three years. Both sides have agreed that a future deal should be as liberalizing as the recently agreed EU-Mexico Modernized Agreement, but with an ambition to go further in areas of mutual interest. We will see how the relationship between the two countries develops, but what is clear is that UK officials still have work to do in terms of their relationship with Mexico.

In accordance with the Mexican Minister of Revenue and Finance (Secretaria de Hacienda y Credito Public), trade between Mexico and the UK represented less than 1%.  However, in accordance to the Delegation of the European Union to Mexico, the EU is Mexico´s third largest trading partner.  Therefore, should Brexit affect the EU, Mexico can consequently be affected.

In addition, this new Mexican trade deal is the beginning of a new era for transatlantic commerce. Just recently, we have seen British Prime Minister Boris Johnson and Canadian Prime Minister Justin Trudeau shaking hands. Soon to come, we are going to see the Canada- UK Trade deal … Does this mean something?? Two of the USMCA countries are already there… Is the UK-US Trade deal closer?? …. Keep an eye on this series and we will provide you with the latest update.