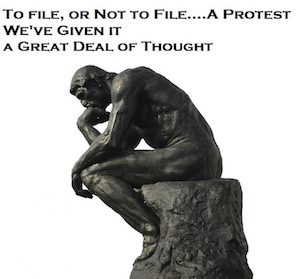 On September 10, 2020, HMTX Industries and related companies, Halstead and Metroflor, filed a lawsuit in the Court of International Trade (“CIT”) alleging that the U.S. Trade Representative (“USTR”) exceeded its authority when it issued tariffs under Section 301 of the Trade Act of 1974 (“Trade Act”).  Specifically, we argue that the tariffs assessed on List 3 and 4A products were not authorized under the Tariff Act and were promulgated in an arbitrary and capricious manner in violation of the Administrative Procedure Act (“APA”).  The lawsuit seeks to have the CIT vacate the List 3 and 4A tariffs, order the government to refund – with interest – any duties paid pursuant to List 3 and 4A, and permanently enjoin the government from collecting any additional List 3 and 4A duties.

A question that many people in the trade community have raised recently is whether plaintiffs should also file protests to reserve their right to a refund.  To answer this question, one must first look at the basis of the CIT’s jurisdiction in the HMTX case.  In HMTX, plaintiffs assert that the CIT has jurisdiction to hear the case under 28 U.S.C. § 1581(i). This provision gives the CIT exclusive jurisdiction over any civil action commenced against the United States and its agencies that arises from any law providing for “tariffs, duties, fees, or other taxes on the importation of merchandise for reasons other than the raising of revenue.”  So far so good because the action challenges the actions of the USTR (an agency of the government) to assess tariffs or duties on merchandise from China, for a reason other than the “raising of revenue.” The stated purpose of the tariffs under Section 301 is to encourage China to change its “acts, policies, and practices related to technology transfer, intellectual property, and innovation.”

Section 1581(i) jurisdiction is good in this case because it does not require the filing and denial of a protest to initiate the action, and you are not limited to filing within 180 days of the complained action to file your case. Under Section 1581(i), you have two years from the date of the event to file.  The CIT, however, has held on numerous occasions that the Court may hear a challenge under § 1581(i) only where the plaintiff neither has nor could have had adequate relief available to it pursuant to litigation under any other Section of 28 U.S.C. § 1581. This means that if the plaintiffs could have filed protests under 28 U.S.C. § 1581(a), then regardless of whether they did so or not, the subject matter jurisdiction of the Court would not be available under 1581(i).  See Nufarm America’s, Inc. v. United States, 29 C.I.T. 1317, 1325, citing Consol. Bearings Co. v. United States, 348 F.3d 997, 1002 (Fed. Cir. 2003); Thomson Consumer Elecs., Inc. v. United States, 247 F.3d 1210, at 1214 (HMF import case); Swisher, 205 F.3d 1358, 1364. (Fe. Cir 2000).)  Section 1581(i) is a grant of residual jurisdiction and applies only if no other form of relief provided in 28 USC § 1581(a) – (h) is or was available.  Thus, if the assessment of Section 301 duties on Chinese goods on lists 3 and 4A is protestable under 19 USC §1514, then the CIT would have to conclude that it does not have jurisdiction under § 1581(i) to hear the HMTX challenge asserting that the tariff violated the APA.  Additionally, if the CIT has jurisdiction to hear a challenge to a denied §1514 protest, then the Court would lack jurisdiction to order a refund for any Section 301 duties paid in to CBP that were not protested within the 180-day protest period following liquidation.  In other words, Section 301 duties paid to CBP for Lists 3 and 4A goods for the first year and a half would likely be unrecoverable.

According to Section 1514 of Title 19, an importer may protest “any clerical error, mistake of fact, or other inadvertence … adverse to the importer, in any entry, liquidation, or reliquidation, and, decisions of [Customs], including the legality of all orders and findings entering into the same, as to (1) the appraised value of merchandise; (2) the classification and rate and amount of duties chargeable; ….”  The section duties paid to CBP for Lists 3 and 4A goods of Chinese origin appear to fall within the scope of § 1514(a)(2) because they relate to the “classification, rate and amount of duties chargeable.” However, if we look deeper, we see that CBP has not made any “decision” with respect to the assessment of the Section 301 duties.  The Court has repeatedly held that when CBP’s actions are ministerial and not decisional, the matter is not subject to protest.  For example, when Customs’ role is “ministerial” as to the rate and amount of duties chargeable in antidumping and countervailing duty cases, the collection of those duties by CBP is not protestable. Thus, while Customs makes decisions as to the facts and the application of the order, Customs acts in a ministerial capacity because it cannot change the rate and amount of antidumping or countervailing duties chargeable.  See LDA Incorporado v. United States, 79 F. Supp. 3d 1331, 1339; Shinyei Corp. of Am. v. United States, 35 C.I.T. 666, 672 (“Here, Customs interpreted Commerce’s instructions, rather than automatically applying an antidumping duty rate. The act of interpretation is not purely ministerial.”)  Thus, to determine if we have a protestable event, we must determine whether there was any action left to the discretion of Customs with regard to the assessment of the 301 duties. Like an AD/CVD order from Commerce, however, Customs is not expected to interpret the USTR’s instructions, but rather, it is simply expected to collect the Section 301 duties based on the value of the goods imported under the USTR’s designated HTSUS number.  (This is not to say that there could not be a decisional issue, for instance, where CBP decides that the goods are covered under list 3 or 4A when the importer claims they are not.)

Some legal commentators are suggesting the filing of protests as a way to suspend the expiration of the liquidation of the entries while the litigation proceeds and the Court looks to a means to fashion a remedy should it hold that the USTRs actions with respect to Lists 3 and 4A are contrary to the statute and the APA.  In other words, the concern is that the Court could find that the actions of the USTR contravene the law, but the Court is without a means to order the refund of the duties.  However, in an action brought pursuant to § 1581(i) to contest Commerce’s liquidation instructions, the Court of Appeals for the Federal Circuit said that it recognized that the CIT’s equitable powers allow it to order reliquidation in a § 1581(i) action, and then continued, saying that the CIT has “broad remedial powers” under 28 U.S.C. § 2643(c)(1), which “allows it to ‘order any other relief that is appropriate in a civil action,’” (Shinyei, 355 F.3d at 1305, 1312). Likewise, in the very recent case of J. Conrad Ltd. v. United States, Slip Op. 20-79 (Ct. Int’l Trade June 1, 2020), the CIT explained how it had the appropriate authority to order the appropriate relief regardless of the finality of the entries’ liquidation according to 19 U.S.C. § 1514:

We understand Plaintiffs’ concern that liquidation of the relevant entries while these cases are pending, if deemed to be final and conclusive for all purposes, would deny them the ultimate remedy for which they brought these actions and would thereby constitute irreparable harm. But should Plaintiffs ultimately prevail on the merits, any liquidations that occurred would not become final and conclusive so as to prevent the Court from ordering a refund of the 25 percent duties with interest. Defendants have expressed their agreement with this conclusion. See Govt. Supp. Br., ECF 56, at 2.

This Court possesses “all the powers in law and equity” of a district court ….  Accordingly, with exceptions not applicable here, this Court may award any form of relief appropriate in a civil action, … including, generally, a money judgment against the United States in a civil action commenced under 28 U.S.C. § 1581 .… In a case such as this one, which involves neither a protestable decision by Customs nor an action arising under 19 U.S.C. § 1516a, the finality of the entries’ liquidation attaching according to 19 U.S.C. § 1514 is no bar to the Court’s ordering appropriate relief.  Shinyei Corp. of Am. v. United States, 355 F.3d 1297, 1312 (Fed. Cir. 2004) (concluding that finality under 19 U.S.C. § 1514 applies to decisions by Customs and did not preclude an order of reliquidation by the CIT in that action brought under 28 U.S.C. § 1581(i) because of the Court’s grant of “broad remedial powers”).

Based on these authorities and others, it would appear to be a futile exercise to prepare and file protests with CBP on liquidating entries of goods that are assessed Section 301 duties under Lists 3 and 4A because the actions of CBP are only “ministerial” in nature.  Further, it is also likely that both the CIT and the Court of Appeals would agree that the CIT has the authority to order the appropriate relief notwithstanding the finality of liquidation rule in 19 U.S.C. § 1514, whether that be the reliquidation of the entries or a straight money judgment based on a record of the amounts deposited.

This article does not constitute legal advice.  If you have any questions regarding the above, please contact Adrienne@braumillerlaw.com or  geo@tuttlelaw.com.