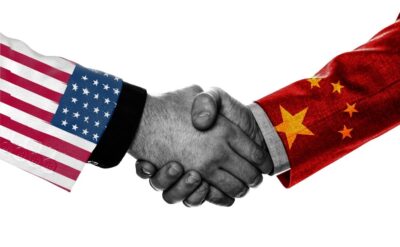 I know, I know, some would say, “Are you kidding? They started this pandemic”? Yes, it did start in Wuhan, in China, but finger pointing at this time is not going to help either of us rebound from the economic impact that it has caused both countries.

Living in the current somewhat apocalyptic world, one would be justified in asking the proverbial question, “Why can’t we all just get along?” In fact, would that mean the tariff war with China could come to an end? Should the tariffs overall at least be pulled back within a reasonable level and allow the supply chains to regain capital lost in the disruption? This of course in my opinion would come with current concessions already on the books but would also include the total abolishment in China (and anywhere else in the world) of the so-called “wet markets”, where the spread of the virus originated in Wuhan. It’s barbaric, 3rd world, and has now been responsible for at least the last two global pandemics, and if allowed to continue, will be responsible for more.

While in the process of writing this piece, the Trump administration announced that it may introduce a new round of tariff breaks for Chinese imports to combat the spread of the novel coronavirus, marking the first time the U.S. has publicly mentioned tariff relief as part of its policy response to the outbreak. No tariffs on medical supplies right now is a “no-brainer.”

In a brief statement, the Office of the U.S. Trade Representative said it is fielding public comments for new tariff exclusions “in an effort to keep current on developments in our national fight against the coronavirus pandemic,” and added that it has always “prioritized health considerations” in carrying out its China tariff push.

The USTR said its new exclusion process will be limited only to products that are “relevant to the medical response”, but importers have pushed the administration to broaden the landscape, removing tariffs even on non-medical consumer goods in an effort to mitigate the outbreak’s economic impact.

Americans for Free Trade, the importer group that clashed with Trump earlier in the week, criticized USTR for taking a piecemeal approach to tariff relief, saying that the nation’s top priority should be “ensuring the health and safety” of those suffering from the virus and the medical personnel treating them.

“Companies should not be forced to go through another comment period filing exclusion requests, so that they can continue to focus their efforts on providing these essential products during this crucial time,” AFT spokesman Jonathan Gold said in a statement.

The agency reiterated its efforts to adapt the China tariffs to public health concerns from the start, noting that products like ventilators, oxygen masks, and medical supplies relevant to treating COVID-19 patients were never subject to levies.

In the chaos, some feel that it’s an opportune time for China to take advantage of the U.S., but I don’t see that happening, as we are co-dependents in business to a great extent. No doubt, this outbreak hurt them deeply, but China’s economy is starting to rebound. (They have even reopened the Starbucks!) We can only hope that this virus is as short lived in the states as it was in China, but of course, the consequences of not listening to Xi Jinping, far outweigh not listening to The President of the United States, which may drag our economy deeper into a hole,  (stimulus package or not) as many simply just keep living life unaffected, while even ignoring expert medical advice. It’s truly a head scratcher. At the time of this writing I am looking at a CNN report of a crowded Clearwater Beach in Florida during this Spring Break. (No social distancing here) Oh well, they all appear healthy, at least some of them. For now. In contrast to our local government’s approach in some areas, an Italian Mayor said recently that he will send police with flame throwers who ignore the “shelter in place” mandate. I don’t see that stern of a warning (even in jest) happening in the U.S. of course, but I keep a close watch on New York’s metrics, Governor Cuomo, and how he is responding.

It all comes back to the supply chain, and to some extent, us counting on China to come through. Alibaba’s Jack Ma has done his part and sent testing and medical equipment to the U.S., but China’s top government officials aren’t very happy with the “Chinese Virus:” label the President had been giving this pandemic. The President is no longer using the term, and I think it’s because Jack called the White House and reminded top U.S. officials that we are needing each other’s support, now more than ever.

Just prior to the pandemic, regarding Section 301, the Phase One agreement was signed, but it will be difficult now, without some assistance from the U.S. Government to fulfill the obligations on what China has agreed to purchase from the U.S. When asked recently, President Trump simply stated that they are doing what they said they would do. Is that possible right now? Aren’t supply chains interrupted? Not so much on their end now, but on ours? I did a little research, and yes, according to AgriPulse, China is following through with pledges under the “phase one” deal to lift barriers on U.S. beef and poultry, and industry officials in the U.S. are counting on the resulting trade to buoy producers.

On our end, a supply management survey found that three out of every four American businesses is experiencing a disruption to some part of their supply chain due to the irregularities in the shipping industry caused by the coronavirus pandemic. China is one of the world’s foremost shipping hubs, but COVID-19 forced the country to close ports and send factory workers home. The International Chamber of Shipping said the pandemic has cost the worldwide industry around $350 million per week.

In January, North American transport volume was down 9.4% compared to the same month of 2019. China government figures show container volumes at the country’s largest eight ports fell 19.8% in February, during the peak of the lock-downs that Beijing imposed, from the year before. Container volumes from China into California’s three largest seaports—Los Angeles, Long Beach and Oakland—were off 35.2% in February from a year ago, according to trade data research group Panjiva. The neighboring ports of Los Angeles and Long Beach, which together make up the largest U.S. gateway for imports from Asia, handled 132,564 fewer containers in February than they did the same month a year ago.

The Port of Seattle closed operations at two of its four container terminals because of diminished shipping demand. The Port of Houston said it had suspended operations at its two main container terminals after a staffer who works at both sites tested positive for the coronavirus. Thousands of containers stacked up at those ports as truck drivers, crane operators and other workers couldn’t go to work because they were either sick or quarantined. This is the new reality within any business when it comes to sustaining operations.

The multi-million dollar question: Is Chinese port call activity returning to 2019 levels? The answer is “yes.” It’s hitting the ‘re-start’ button on the Chinese economy and giving it traction. Given China’s role as shipping’s largest market with 22% of global imports, it’s a very good sign. Now, if this could be coupled with tariff reductions, and global stimulus packages, we may stand a good chance of bringing the world economies back much quicker.

So, our (U.S.) dependence on China for goods (especially medicine) has really come to the surface in the crisis, and yes, bringing much of  it back home is in the bigger picture, but right now, we need China to make a comeback.

JPMorgan Chase’s Joseph Lupton mentioned, “China’s economy will bounce back from the coronavirus and grow 15% in the second quarter on a quarter-on-quarter, annualized basis. Well, that’s an ambitious statement, but I hope it comes to fruition, because we need some light at the end of the tunnel, which some are saying is now 18-months long.

It’s easy to be pessimistic right now and accusatory, and some will say that based on the size of the economic package that was just blessed by the senate, ($2.2 trillion first round) those tariffs on Chinese origin products are well justified to help pay back the debt we are owed. It’s an argument worth putting on the shelf for now as there are other ways to make this partnership in trade beneficial to both in the next year, or two, of rebuilding.

Some feel that after the coronavirus it will be a China led world, as we will no longer be the strongest economy in the world. (enter all conspiracy theories here) As we rebuild, there will be several modifications to “business as usual.” The problem China has now is that orders that have already been fulfilled, but not shipped, (garment industry for example) are being cancelled. This new reality will be devastating as millions of workers could be laid off in China. Yes, we are all in this together.

My prediction is that two young scientists from Sweden very soon will discover the “cocktail” of antibodies needed to knock out the virus in a day.

In the meantime, President Trump has publicly dismissed the idea of tariff reduction as part of his coronavirus strategy, while White House trade adviser Peter Navarro has floated an executive order that will strengthen “Buy American” government procurement rules for drugs and medical devices as a means of reducing the government’s reliance on imports. Oh well, that could change in an upcoming tweet.