This article outlines the various mechanisms available to companies that encounter problems with the implementation and operation of the United States-Mexico-Canada Agreement (USMCA) that officially replaces NAFTA on July 1, 2020.  While the new agreement provides many of the same mechanisms as NAFTA, there have been significant changes.

The primary methods for resolving problems are government-to-government consultations and committees. It is important for any trader, producer, and purchaser to understand how to bring concerns about the operation of the agreement or how it is implemented in each of the countries to the attention of the officials with the authority to make decisions that can impact such issues.  The article also outlines dispute settlement mechanisms and the coverage for each one.

The United States-Mexico-Canada Agreement (USMCA) enters into force on July 1, 2020.  It replaces the North American Free Trade Agreement (NAFTA) that has been the framework for trade relations in North America since January 1, 1994.  The NAFTA was a historic agreement that broadened the earlier U.S.-Canada Free Trade Agreement (entry into force on January 1, 1989) to Mexico to create the largest free trade area in the world.  It also proved that a developing country could take on the full range of commitments as the developed countries, establishing Mexico as a leader on the world stage for the other developing countries who were negotiating in the Uruguay Round of multilateral trade negotiations. The Uruguay Round resulted in the creation of the World Trade Organization (WTO) and the signing of the General Agreement on Tariffs and Trade (GATT 1994), that entered into force on January 1, 1995.  All of these agreements were built upon the framework for trade relations of the GATT 1947 (entry into force on January 1, 1948).

USMCA Chapter 31 provides the mechanism for the Parties, the three governments, to resolve stubborn issues that have first been discussed in consultations by technical experts and vetted by technical committees. The disputes are then reviewed by the Free Trade Commission (FTC); the ministerial level body composed of the U.S. Trade Representative and his or her counterparts in Mexico and Canada.  Only when expert consultations and political level consultations fail to achieve the resolution of a dispute, may a binational panel be convened to assist the Parties.  Panels may review:

One of the strengths of the GATT, NAFTA and USMCA is the requirement that the governments involved consult regularly with each other about the implementation of the agreements and discuss problems, improvements and other issues specific to each chapters’ commitments.  Because the governments are Parties to the USMCA, the commitments focus on the rules to be applied by each government through its own national laws and regulations to the subject matter of each chapter.  These commitments are then implemented through the national laws and regulations of each Party and are generally enforced by the administrative and judicial bodies pertinent to each subject. As a consequence of this structure, the basic level of official communication is among the lowest level of officials who have technical responsibility in each area of the agreement, from customs issues to investment, services, labor and environment.  The broad range and number of committees and consultation bodies is provided below. 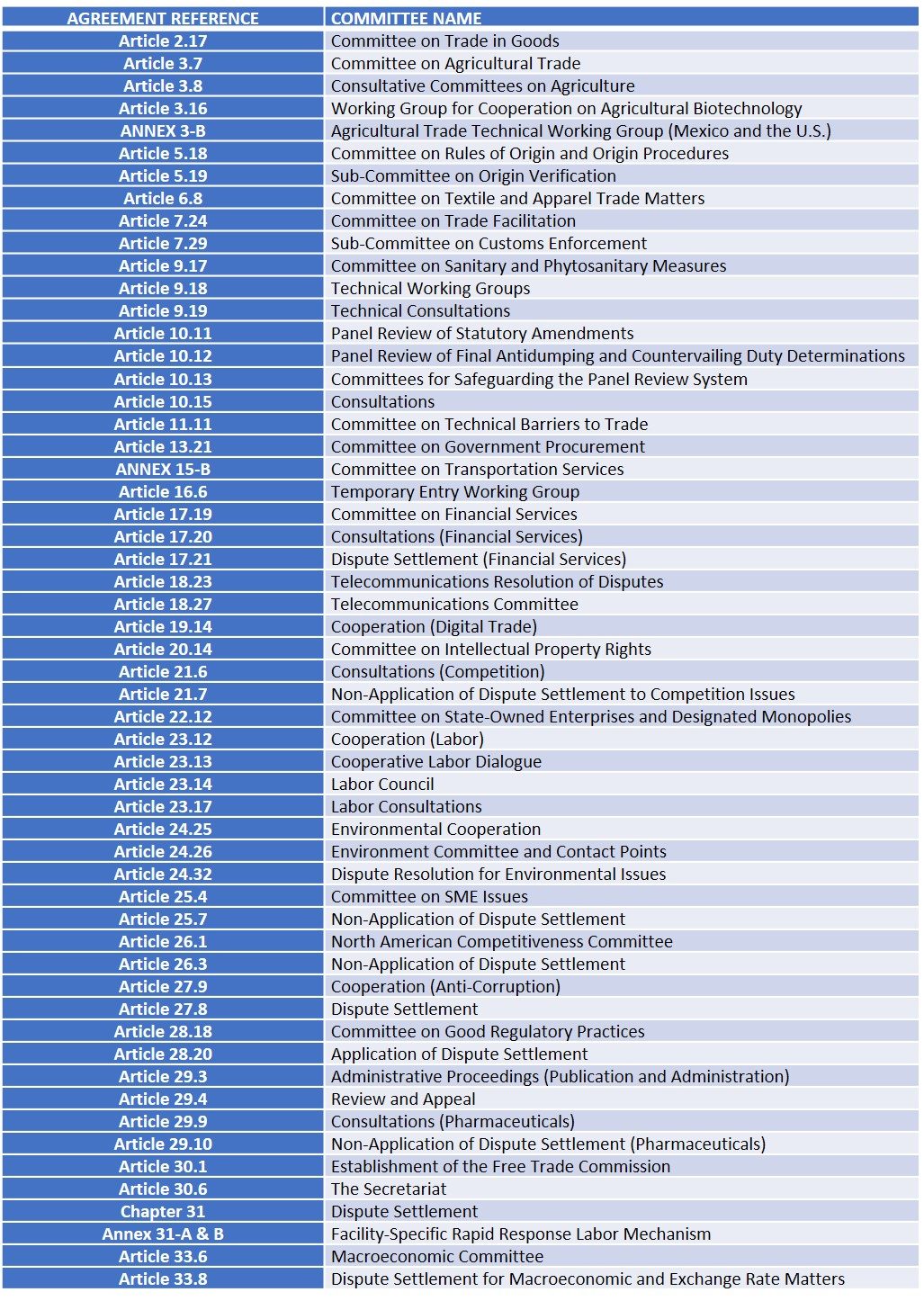 It is important to distinguish the areas where individual companies have a direct right to bring claims or resolve issues with the governments, and the more common approach taken in the agreement in which government-to-government committees may consult about problems with the implementation of the agreement to resolve them on behalf of business sectors or individual companies.  For individuals or companies to obtain relief for disputed matters covered by the USMCA, they must first approach the officials responsible in the Party making the decision.  Then they must reach out to the counterpart officials in their own government for further assistance.  However, there are mechanisms available to private parties, based upon the commitments in the Agreement, as outlined below.

Customs Offenses:  Customs determinations are generally made upon entry.  There are well established avenues available for companies to obtain advance rulings, challenge customs duty and classification decisions and other related matters.  The USMCA does not revise those procedures. It instead ensures that there are at least two levels of appeal within the customs authority for any dispute.

SPS Concerns:  While no right of action is conferred, a company may contact relevant government officials to request that they use the mechanism for technical consultations to raise specific sanitary and phytosanitary (SPS) issues with the offending government.

AD/CVD Matters:  USMCA Chapter 10 carries over the review process for five-member binational panels to review final antidumping and countervailing duty (AD/CVD) determinations by the investigating authorities of each Party.  As with NAFTA Chapter 19, the Parties have the option to use the judicial process for appeal in the country making the determination, but request for panel review is dispositive of the venue under the national law of that country.

Investor State Dispute Settlement:  Investors may bring claims for breaches of the national treatment, most favored nation treatment or expropriation provisions to consultation and negotiation, and if they fail to settle the claim, to arbitration.  Some government contracts are also covered under Annex 14-E.  Canada is opting out of the investment provisions (it has lost over $200 million in claims under NAFTA).

Temporary Entry Decisions:  There is no private right of action, but for a Party to go to dispute settlement under Chapter 31 for a particular denial of entry, it must allege a pattern of practice of a Party and the business person must exhaust the available administrative remedies.  As a practical matter, the recourse for denial of entry for most business travelers will be to request an immediate appeal of the denial of entry, at the time it occurs.

Digital Trade:  Whatever rights of action accrue to private parties now will continue.  The Parties “encourage development by the private sector of methods of self-regulation that foster digital trade, including codes of conduct, model contracts, guidelines, and enforcement mechanisms.”  They also “shall consider establishing a forum to address any of the issues listed above, or any other matter pertaining to the operation of this Chapter.”

Intellectual Property Rights:  The USMCA, like other trade agreements, is designed to establish the base level of protection for all the enumerated types of intellectual property.  The private rights of action available in each country’s laws must conform to those base levels, including civil and criminal remedies as well as border enforcement measures.

Competition:  The USMCA addresses the legal framework in each country and establishes the minimum standards for the law and authorities.  It addresses the investigatory authority in such matters to ensure private parties have rights to representation and some level of transparency as to each Party’s enforcement of its laws.  There is no recourse to dispute settlement under either the investment provisions, nor general dispute settlement between the Parties for competition enforcement activities of any Party.

Labor Rights: “Each Party shall ensure that a person with a recognized interest under its law in a particular matter has appropriate access to tribunals for the enforcement of its labor laws. These tribunals may include administrative tribunals, quasi-judicial tribunals, judicial tribunals, or labor tribunals, as provided for in each Party’s law.”   The Agreement includes innovative Facility-Specific Rapid Response Labor Mechanisms between Canada and Mexico, and between the United States and Mexico. This enforcement mechanism would allow for the rapid deployment of a three-member panel of labor experts to a facility to ensure that the national labor law is being respected.

Environment:  Any person of a Party may file a submission asserting that a Party is failing to effectively enforce its environmental laws. Such submissions shall be filed with the Secretariat of the Commission for Environmental Cooperation (CEC Secretariat).  The side Environment Cooperation Agreement continues the institutional framework established by NAFTA.

Regulatory Practices:  The Parties agreed to provide interested persons the right to comment on the impact of new regulations. They also shall have an opportunity to submit written suggestions to any regulatory authority for the issuance, modification, or repeal of a regulation, based upon a set of criteria.

Administrative Actions:  “Each Party shall establish or maintain judicial, quasi-judicial, or administrative tribunals or procedures for the purpose of the prompt review and, if warranted, correction of a final administrative action with respect to any matter covered by this Agreement.”