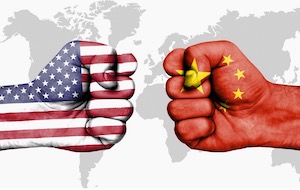 Relations Between the U.S. and China In One Word, Dismal Is a Decline in Trade Inevitable?

It’s goes without saying, but I will say it anyway, the recent visit to Taiwan by U.S. House Speaker Nancy Pelosi certainly didn’t help the already strained relations much, but within her reasoning for defiance of Beijing, the democracies of the world must stand together. The Chinese Embassy has now threatened to go to war with the U.S. over Taiwan.

In the aftermath of the visit, as I tap the keyboard producing this article 8/6/2022, China will be finishing its theater of shock and awe around the island, including its disruption of trade through the Straits of Taiwan. Of note, 60% of maritime trade passes through Asia, with the South China Sea carrying an estimated one-third of the global shipping.

The Chinese Defense Ministry, prior to the total waste of good ammunition, had previously released a map around the island where he said they would conduct air and sea exercises as well as long-range live-fire exercises. All sea vessels, cargo ships included, had been warned to stay out of the areas during the drills. Ah, politics and trade, they sort of go together like soup and sandwich. You can’t have one without the other.

Taiwan has called the military exercises the equivalent of a “maritime and aerial blockade,” as it threatens to disrupt trade passing through one of the world’s busiest shipping lanes. In the meantime, China has cut-off communications with the U.S. in several diplomatic areas, inclusive of top military brass open lines of communication, which is very dangerous at this juncture given the recent activity in the S. China Sea.

Honestly, our diplomatic relationship with China has reached an all-time low, which begs the question, “Gosh, aside from threatening to kill each other, how are we doing in bilateral trade?

Back in time, a couple decades plus, within a calmer geopolitical landscape, even prior to China joining the WTO, trade between the two countries was showing signs of steady growth. The WTO membership was essentially meant to ensure “permanent normal trade relations,” providing U.S. and foreign companies some certainty that they could produce product in China and export it to the United States. This did in fact work, as trade forged ahead at a record pace.

Opportunity between the U.S. and China created $100 billion in bilateral trade in 2001 alone. Look where we are now. In 2021, the total value of the U.S. trade in goods with China was approximately $657 billion U.S. dollars. $151 billion U.S. dollars in export value and a $506 billion in imports. Through June of 2022, according to U.S. Census, imports were approximately $272 billion, and exports stood at around $72 billion, which puts us on track for approximately $700 billion in bilateral trade by the end of 2022. Given all of the obstacles, autocracy vs. democracy, S. China Sea activity, intellectual property theft, government subsidies and dumping cheap product into the U.S., China tariffs, etc. this is quite an impressive number.

Speaking of obstacles that I believe have hampered the bilateral trade numbers from climbing towards the trillion mark annually, such as the Section 301 tariffs, there is a new dark cloud in the picture, which is a more forceful Forced Labor initiative. Yes, it’s been around for a while, but it was never the monster that it is today. Our Partner & Founder, Adrienne Braumiller, and BLG Attorney Harold Jackson have written a couple of good articles that you may choose to read that outline the due diligence necessary in getting product into the U.S., without Customs snagging it in a WRO (Withhold Release Order), or a “Finding” (https://www.braumillerlaw.com/primer-forced-labor-enforcement-u-s-importers/”). Both are not good when it comes to proving that one’s product was manufactured/produced with no Forced Labor involved. It’s, almost an exercise in futility given the demands that an importer is tasked with in putting the pieces of the puzzle together A-Z, all 3rd party supply lines included, for Customs to evaluate and subsequently make a determination in your favor. When it comes to product manufactured in China, it gets even more difficult, especially the Uyghur Autonomous Region (Xinjiang). If this area of China is included in the product’s origin, it’s inevitable that it will be seized at the U.S. port by Customs, and therefore one is guilty until proven otherwise, and there isn’t much time to do so. (30 days) More specifically, the Uyghur Forced Labor Prevention Act (“UFLPA”), which took effect on June 21, 2022, bans the importation of all goods made in the Xinjiang Uyghur Autonomous Region (“XUAR”) in China. Goods imported from the XUAR or goods whose inputs, raw materials, or components are made from goods from the XUAR, CBP will presume that those goods were used using forced labor and is directed to seize the goods upon entry. They have to, it’s the law.

I’ve now sat through 6 expert presentations in the past 3 months on the topic of Forced Labor (half were presented by our Attorneys at Braumiller Law Group and Tuttle Law), and what a U.S. importer must do in order to comply, and quite frankly, I have my opinion (it’s crazy), but I do not wish to give up and simply call it a mandate by the U.S. Trade Representative to “Stop Doing Business with China.” Section 301 tariffs opened the door to this, and it was up to the international trade lawyers, like us, to go to Washington D.C. and prove that our client’s product could not be sourced and/or produced anywhere else in the world except China. These “accepted pleas’ were called “Exclusions.” We did fairly well at about 60% acceptance per the Commerce Department, as the national average was around 33%, but it was never enough, and many companies were bankrupted by the policy. Implemented in 2018 by the Trump administration to punish China and perpetuated by the Biden administration to this day. However ominous Section 301 remains, the Forced Labor initiative makes it pale in comparison.

Fact is, China is the sourcing capital of the world. Even when one moves a factory from China to, let’s say, Malaysia, the same product sourcing from China often follows, leading right back to Country of Origin, China. What’s a mother to do? Well, I took a snapshot from my colleague’s article on Forced Labor of what it would take to be compliant inclusive of the analysis of the supply chain and all of its tributaries that many importers are unaware of as supplemental to the end product.

One must now: – Document the Upstream Labor and Material Production: Trace the origin of the goods and their components by compiling a detailed document trail including, but not limited to, the following types of documents and information.

Videos and transcripts of interviews with workers at the foreign factories showing proof that the worker is not working under duress, such as proof of no handcuffs, consent to labor, and acceptable living conditions. Not to mention, but I will, China’s Ministry of Commerce (MOFCOM) issued Rules on Counteracting Unjustified Extra-Territorial Application of Foreign Legislation and Other Measures (Blocking Rules) back in January of 2021, but that’s an article in itself.

I know what you are thinking. How in the hell is a U.S. importer of product from China, much less the Uyghur Region, supposed to be able to accomplish these tasks? One could in fact conclude, you’re not, and you need to simply find another country to do business with. I however wish to overcome this more aggressive mandate in trade policy with China and see if the mountain can in fact be conquered, before it succumbs to climate change, or war. Most say, “Fat chance Bob,” (Well, I’m opposed to fat, work out 6 days a week), and I’m determined. I am currently in discussion with a company global in reach, based in China, who do nothing but conduct factory audits for a living, primarily in China. They have been in business for decades, started out as a lab testing various products for safety and compliance, and branched out into a multitude of products handling quality control and testing…on a 3rd party basis, separate from the government, which is key. I am cautiously optimistic that the audit that they conduct at a factory for “Social Compliance”, as it does include Forced Labor, could also entail the demands of the U.S. Customs office. Quite frankly, I do not see how a U.S. based auditing firm could even get through the front door of a Chinese factory, and if the government found out, how they would even make it back to the states. However, a company based in China, with a reputation of working within the cultural and political parameters might just find a way to accomplish many, if not all, of the line items brought forth in order to get an “A” on the test. There is no simple “passing grade” where a majority makes one “good to go” on entry. U.S. Customs is looking for a way to say no. Would Customs even accept Chinese auditors blessing a Chinese factory? As a result of the hard line, I will also want Customs officials to bless the auditors (auditing company) in advance, much like a “Ruling” on specific product classifications. Once “blessed” the challenge will be to perform the tasks cost effectively, and in a timely manner in order to keep the supply chains flowing. I am in the initial stages of discussion, so if you are interested in my “Fat Chance” progress, you can find me on the Braumiller Law Group website, or simply ping me: bob@braumillerlaw.com.