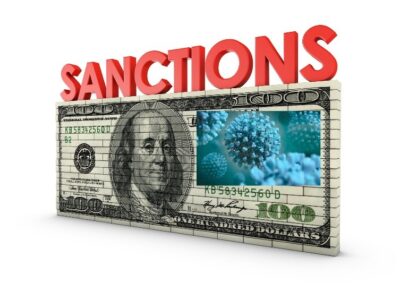 Since the emergence of COVID-19 in the U.S. beginning in February of 2020, there is general uncertainty over how the pandemic could affect the regulatory landscape, including regulations relating to U.S. sanctions and export controls.  A review of the actions taken to date suggest that little has changed with respect to U.S. economic sanctions.  However, COVID-19 could result in additional export controls, including restrictions on exports of pharmaceuticals, personal protective equipment (“PPE”), and other goods.

Despite COVID-19, the Trump Administration has maintained an aggressive sanctions policy, with continued designations of Specially Designated Nationals (“SDNs”) and enforcement actions.  In the case of sanctions on Iran, the U.S. has refused to offer any form of relief notwithstanding calls from the E.U. and China to ease sanctions to facilitate the flow of humanitarian goods to Iran.  Since February, the U.S. has imposed sanctions on dozens of individuals and entities in connection with Iran.  For instance, on March 19, OFAC designated five United Arab Emirates-based companies for facilitating sales of Iranian petroleum and petrochemicals.

While U.S. sanctions on Iran currently authorize the export of most drugs and medical devices to Iran, certain medical supplies that could be useful in combating COVID-19 are excluded from the authorizations, including full face mask respirators and certain decontamination systems.  Furthermore, the authorization does not allow exports to military, intelligence, or law enforcement purchasers or importers.  These restrictions, among others, increase the risks associated with exports of medical supplies to Iran and discourage both U.S and non-U.S. companies from exporting such goods to Iran.

Meanwhile, since March, there have been a number of law enforcement actions for violations of U.S. sanctions on Iran, including an extradition of an Iranian citizen residing in the UAE to the U.S. on March 14 to face charges for unauthorized exports to Iran of U.S.-origin goods.  Two days later, another individual was convicted for evading sanctions on Iran.  These cases suggest that the U.S. Department of Justice continues to prioritize sanctions on Iran despite the ongoing pandemic.

As the number of infections and deaths caused by COVID-19 grows there will likely be a corresponding growth in countries calling for a relaxation of both U.S. and EU sanctions in order to facilitate cross-border cooperation and the flow of humanitarian goods and services.  For instance, at the G20 summit, which was held virtually due to COVID-19, Russian President Vladimir Putin proposed a moratorium on sanctions against Russia.  This sentiment has been echoed by prominent figures both within and outside of the U.S., including the UN High Commissioner for Human Rights, who stated “to support the rights and lives of millions of people in these countries, sectoral sanctions should be eased or suspended. In a context of global pandemic, impeding medical efforts in one country heightens the risk for all of us.”  Nonetheless, at the moment there’s no indication that the Trump Administration intends to waive sanctions, particularly with respect to Iran.

There is growing pressure on the Trump Administration to impose export restrictions on goods that are currently in short supply as a result of COVID-19.  Over fifty countries have imposed restrictions on exports of medical supplies, including items such as ventilators, gloves, and face masks.  However, to date, the United States has not imposed any restrictions on exports of drugs or medical suppliers in response to COVID-19.  Given the shortage of critical supplies, a growing chorus of policy makers is calling for export restrictions on medical supplies.  Among those calling for such restrictions is Georgia Congressman and Trump ally Doug Collins.  In a letter to Secretary of State Pompeo, Rep. Collins stated that the Northeast Georgia Health System was unable to procure high-speed test equipment from a domestic manufacturer that prioritized sales to Europe and urged the State Department to “consider a temporary ban on exports of equipment and supplies necessary to combatting the coronavirus until domestic demand has been met.”

Given the current shortage of critical medical supplies, there is reason to believe the President will act to restrict at least some exports of medical supplies.  Under the Export Control Act of 2018, the President has broad authority to impose export restrictions for purposes of national security.  Generally, the Export Administration Regulations (“EAR”) control high performance goods and technology, or items that present clear national security implications, such as chemicals or materials that can be used in chemical or biological weapons.  Thus, basic medical supplies do not fit neatly within most of the existing “reasons” for export controls outlined in the EAR, which include “Anti-Terrorism” (“AT”), “Nuclear Nonproliferation” (“NP”), “National Security,” “Missile Technology” (“MT”), among others. However, under a relatively obscure “reason” for control, BIS can impose export controls on items for “Short Supply” (“SS”).  See 15 C.F.R. 754.1.  A number of items are controlled for “SS,” including certain petroleum products, western red cedar, and, oddly enough, “horses exported by sea.”  Thus, there is an existing regulatory framework under which BIS could potentially impose temporary export controls on medical supplies.

Separately, the President has the authority under the Defense Production Act of 1950 (“DPA”) to direct private companies to prioritize government contracts.  Notably, on March 27, the President used his authorities under the DPA for the first time to direct General Motors to produce ventilators.  However, given the broad powers granted to the President under the DPA, it is conceivable that the DPA could be used in other ways, including to impose export restrictions on U.S. manufacturers of medical supplies.

Despite COVID-19, the Trump Administration has, to date, stayed the course of an aggressive sanctions policy, particularly when it comes to sanctions on Iran.  However, given the ever-growing global humanitarian crisis posed by COVID-19, its plausible that sanctions enforcement will be eased in some way to facilitate humanitarian assistance.  Where changes are more likely to occur is in the area of export controls, which could be an important tool for ensuring critical medical supplies remain in the U.S., as well as a means to counteract export restrictions imposed by other countries around the world.  Therefore, we recommend that manufacturers and exporters of medical supplies monitor and prepare for the possibility of broad export restrictions, which could be implemented in the near future.