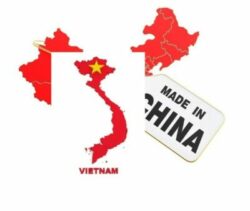 The trade war between the U.S. and China has dragged on for more than a year now with 25% tariffs currently placed on $200 billion of Chinese goods. On August 1, President Trump announced that the U.S. would move forward with imposing a 10 percent ad valorem tariff on a fourth list of Chinese imports worth about $300 billion. The tariffs on the newest list are slated to go into effect September 1, 2019, but as of August 13, the USTR announced that List 4 will be split into two lists – List 4A and 4B. While some items on List 4 will have 10% tariffs applied on September 1, 2019, part of the list will be delayed until December 15, 2019.

In light of the intensifying trade war, and no end in sight, several major companies have announced plans to shift manufacturing from China. We have done our part on the front line. To date, on behalf of our clients, we have filed for over 400 inclusion requests in Washington D.C. (A little over 200 have been accepted) We’re batting .500! The others, well some are making the move, as outlined in this article.

Who is notable on the list?  Google, Apple, Nintendo, and Dell are plotting to avoid the damage tariffs will cause. With such well-known companies announcing their plans to move, is this the start of a mass exodus from China? Maybe not yet, but certainly many large firms who mean a great deal to the Chinese economy are making their exit plans known. So, who is winning in this ongoing battle between Washington and Beijing? It’s certainly not Washington or Beijing, and definitely not the American consumer. The answer: According to the Nikkei Asian review, Vietnam has risen to the top far above #2-Taiwan, Chile, Malaysia and Argentina as far as trade diversion beneficiaries top (5). Formally, a recent report found that Vietnam has thus far been the biggest beneficiary of this so-called trade diversion, gaining 7.9% of its gross domestic product (GDP) as a result of increased exports to both China and the US.

On the horizon, China is without a doubt taking note of a certain company’s “plans” as Apple looks to shift production, and is setting its sights on Southeast Asia, with India and Vietnam being the front-runners for iPhone production. The company will soon start trial production on AirPods in Vietnam, making inroads for mass production. Also, very noteworthy at this juncture, Japan’s Nintendo is going to pull a portion of its video game console production from China and move it to Vietnam.

The movement of the larger corporations being affected by the tariffs is slightly overshadowed by another highly significant segment of related imports. The U.S. footwear industry is one of the biggest victims in an escalating trade war with China. In the landscape of what is to be, as previously mentioned in this article, we all now know that President Trump has announced another round of tariffs on the roughly $300 billion of Chinese goods that hadn’t already been targeted. List 4, here we go. Pending a miracle intervention in the negotiation process, the 10% duties will take effect on Sept. 1st, impacting consumer goods such as apparel, home textiles like bedding and shoes. Shoes!!! Yes, shoes. That is a huuuuuuge industry that has been aggressively lobbying for President Trump to not increase tariffs, laying out in detail just how much that is going to hurt the American consumer in increased pricing.

The Footwear Distributors & Retailers of America are not very happy with President trump right now. This is an industry organization with more than 500 members, including “The Big One”, Walmart. A quote from their website: 99% of all shoes sold in America are imported, 70% of all shoe imports are from China. Footwear tariffs are already some of the highest on any consumer good, averaging 11% but reaching upwards of 48% and 67.5% on certain footwear types. Adding an additional 10% on top of these tariffs mean higher prices for consumers. In 2018 alone, consumers paid $7 billion more than needed at checkout. Another 10% on top of that means consumers would pay nearly $10 billion more for their shoes each year thanks to tariffs. Where are the lobbyists for Wally World? We are doing what we can. See www.reigncore.com for more information.

Footwear giants, like Nike, Under Armour and Puma are also taking a hit, and subsequently have steadily been decreasing their reliance on China, shifting resources to places like, you guessed it, Vietnam. Still, the U.S. imported a staggering $11.4 billion worth of footwear from China last year, according to data from the U.S. Census Bureau, making it an industry that is very reliant on the country for its cheap, skilled labor, but not cheaper labor than……Vietnam.

This is where Vietnam can stick out its chest a little and allow its superman-like cape to blow in the wind, as Nike made 47% of its shoes in Vietnam in fiscal 2018, according to its latest annual report. It made 26% in China and 21% in Indonesia. I look for that 26% in China to be down to 13% within the next few years, and Vietnam to be at 60%. Nike….Just Do it!

In the overall grand scheme of things, it’s not just foreign companies who are rethinking their production in China, but also several Chinese companies who are leaving China. Yep!!! Chinese multinational electronics company TCL is also moving its TV production to Vietnam.

The trade war seems to be taking a toll on the Chinese economy although Beijing would say otherwise. Recent data showed its economic growth slowed to 6.2% in the second quarter, which is the weakest rate in at least 27 years. President Trump claimed the slower growth is evidence that China is losing the trade war as the country faces an exodus of companies.

“The United States Tariffs are having a major effect on companies wanting to leave China for non-tariffed countries. Thousands of companies are leaving. This is why China wants to make a deal,” Trump said in a recent twitter post.

Back to the semi-mass exodus. And some fun facts: Back in 1987 Vietnam officially opened itself up to foreign direct investment (FDI), and since then has more than kept pace with other southeast Asian countries economically. In 2016, the Vietnamese government announced a record high in FDI inflow at US$15.8 billion. According to the Ministry of Industry and Trade’s 2016 Import-Export Report, Vietnam saw US$176.6 billion in export revenue (a 9 percent year on year rise), much of it from foreign companies. Over the last few decades, the Vietnamese government has made a concerted effort to appeal to foreign companies, mainly because it depends on foreign technology and capital to upgrade its infrastructures and industrial base.

Vietnam is making doing business there very attractive to foreign companies, while in the meantime, the shine on China has become somewhat tarnished when it comes to foreign business. According to the World Bank’s Ease of Doing Business report, ranking 190 countries, China comes in at #46. The report takes into consideration a multitude of factors like dealing with construction permits, registering property, getting electricity, getting credit, etc. To be more specific in the difference regarding doing business, it takes about 116 days and 10 procedures to open a warehouse in Vietnam. In China, according to the report, the same action takes 274 days and includes 22 required procedures. Note: Vietnam came in at #69…still scratching my head on this one)

Take a look for yourself; https://www.doingbusiness.org/en/rankings

Manufacturers in China are also being constantly challenged by new conformity and standard regulations, environmental policies, visits by aggressive tax bureau officials and a more demanding (and expensive) workforce (not to mention the issues with Intellectual Property theft that have plagued many). It makes one just want to throw their hands up in the air and look to the south. Not only does Vietnam have less red tape and headaches for a start-up, but it’s the fastest growing consumer market in Southeast Asia. In addition, Vietnam is currently involved with many trade deals that will benefit manufactures based in the country. The Trans-Pacific Partnership (TPP) is of course defunct. So moving forward, Vietnam is currently in negotiations with 15 other nations for another ambitious FTA. The Regional Comprehensive Economic Program (RCEP) is a proposed free trade agreement between the ten ASEAN member states and India, China, Australia, Japan, South Korea, and New Zealand. This roster of nations accounts for roughly 40% of world trade and could potentially create the largest bloc in the world.  While Washington is meeting with Japan this week regarding a “side deal” that will not require congressional approval, Biden mentioned that if he is elected, he would renegotiate the TPP.

RCEP negotiations were formally launched in November 2012 at the ASEAN Summit in Cambodia.

In 2017, prospective RCEP member states accounted for a population of 3.4 billion people with a total Gross Domestic Product (GDP, PPP) of $49.5 trillion, approximately 39 percent of the world’s GDP, with the combined GDPs of China and India making up more than half that amount.

RCEP is the world’s largest economic bloc, covering nearly half of the global economy. According to estimates by PwC, the Gross Domestic Product (GDP, PPP) of RCEP member states is likely to amount to nearly $250 trillion by 2050, or a quarter of a quadrillion dollars, with the combined GDPs of China and India making up more than 75% of the amount. RCEP’s share of the global economy could account for half of the estimated $0.5 quadrillion global (GDP, PPP) by 2050. Take that U.S.A.!!!!!!!