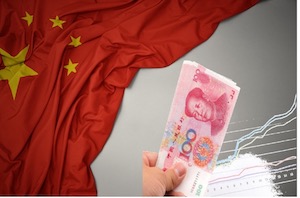 Almost two years now into the global pandemic and the world’s two most powerful economies are having to take a hard long look at their supply chain shortcomings, as well as becoming economically self-sufficient to a great extent. During the pandemic it became painfully obvious that the U.S. has become far too dependent on China for imports of many essential needs. On the other side of the globe, China has become tired of being the world’s factory and main exporter of goods and looks to tap further into its 1.4 billion population, and the middle class core of its domestic economy.

While the Biden Administration implemented a Strikeforce on International Trade relations to identify shortcomings in supply chains, and make improvements to accessibility of essential needs (semiconductors to name one elephant in the room) (my article from August regarding the strike force: https://www.braumillerlaw.com/the-us-strike-force-on-unfair-trade-a-global-perspective/ China is creating the blueprint along the lines of the same strategy. Fact is, we still need each other, and it’s well recognized within both governments’ agency discussions, but both economies could be doing a much better job developing the market domestically.

It was in May of this year (2021) that President Xi Jinping proposed the “dual circulation strategy” at a Politburo meeting. Even though the DCS (because we love government departmental acronyms) is now a hot topic among China’s economic leadership, there is still a void regarding the details outlining the specific steps for implementation. In my studies, I have an idea of what it is supposed to be, but the question is, will China ever get there.

In a nutshell, with no added legalese, the dual circulation strategy is a two-headed monster based on nationalism regarding a developmental strategy that is designed to create growth in China’s domestic demand, which is the internal component, as well as stimulate growth to export markets, the external. The overall plan aims to build upon initiatives that allow domestic and foreign markets to balance each other. The basic economics of the plan is that the country will continue working to improve its footprint in global trade, finance and technology, while building domestic consumption, production, and technological capabilities. As the pandemic made glaringly obvious, all nations need to have a good plan in place against global market disruptions. The strategy also plays into a recovery following the pandemic, which unfortunately the world’s major markets are all still dealing with to this day due to the large percentage of the unvaccinated populations.

The blueprint for the DCS is based on a long-term goal aiming to counter the progression of declining economic growth from weaker global demand for Chinese goods and services, as well as (like the U.S.) a high dependency on foreign technologies in strategic sectors, as previously mentioned, such as semiconductors. The Biden Administration takes aim at this same goal from a little different perspective monetarily speaking, and the direct translation in China is that it will lead to new and more stringent policies and regulations that promote domestic demand to protect itself from another global economic disruption. Stating that one needs to encourage technological self-sufficiency and making it happen, well, that is much easier said than done.

That being said, the focus for growth within the borders would center on the roughly 350-400 million middle class consumers in China. This of course, begs the question, as China is the world’s “go-to” on sourcing, what in the world would they need to import that they cannot manufacture or source domestically?

This is where Xi Jinping’s focus on home-grown innovation and technology become paramount within the DCS. In the big picture, curiosity, and simple math would reveal that China’s population of 1.4 billion people created a total of $2.056 trillion in 2020 imports, which translates to roughly $1,500 in annual product demand from the outside world for every individual within its borders. Roughly 57% of the imports were from Asian countries. The top five Chinese imports are: Electrical machinery, equipment: US$548.7 billion (26.7% of total imports), Mineral fuels including oil: $267.6 billion (13%), Machinery including computers: $192 billion (9.3%), Ores, slag, ash: $180 billion (8.8%), Optical, technical, medical apparatus: $99.1 billion (4.8%)

Unlike the U.S., China’s production of integrated circuits and industrial robots spiked in 2020, as the country endeavored to boost its output of hi-tech products amid tighter U.S. restrictions, however, a similar spike in imported chips shows that, much like the U.S., China remains far from its goal of self-sufficiency in the critical technology sector as it relies on $300 billion worth of imported semiconductors to meet over 85% of its domestic market demand.

Driving innovation in technology over the long-term is not that simple as one needs the resources to tap into. Historically, China has experienced decades of brain drain, in which Chinese students with U.S. PhD’s stayed within the U.S. upon academic requirements being completed. Not to mention the fact, but I will, that China has nearly 35 million more single men than women, and about half of them are within the “marriageable age” range, but the problem is, those few women in the millennial age range for the most part do not wish to get married, as they are far more interested in developing their careers. Despite this ever so obvious reason for a young, primed for success, male to remain in the U.S. there is the consideration of the daily political turmoil (just watch CNN) and blatantly ignorant, anti-Asian sentiment, and as a result, there has been a sharp increase in the proportion of returnees. I do however think that this trend may reverse if Beijing continues to keep heavily pushing the Cult of Personality, with Xi Jinping being the absolute focal point of all that is the People’s Republic of China. University youth will eventually rebel. I do not wish to digress, as this particular subject matter is an entirely different article, as the crackdown and censorship is substantial, and keep in mind, this has been developing for quite a while, specifically, since October 2017, when several universities across China placed “Xi Jinping Thought” at the core of their curriculum, which is the first time since Mao Zedong that a Chinese leader has been granted similar academic stature.

Getting back to much needed localized innovation, the Biden Administration has committed billions to the semiconductor business within the U.S. to overcome our technological dependency. China, on the other hand, is going to be dependent on foreign investment, which is a long shot at best if the current global perception of intellectual property theft, and perceived goal of state ownership continues, that will be tough nut to crack for Beijing. Overcoming the multinational “fear factor” of forced technology transfer, as the price of doing business in China will be key to the success. Although Beijing has pretty much shut down all of the infamous fake Apple stores that were scattered about in various cities, most will not forget that in one 2016 court case, Apple lost the right to the exclusive use of the iPhone trademark in China in favor of a local company who makes handbags and leather goods. What?

Counterfeits and ominous business perceptions aside, another problem is that from the ground floor, private consumption sits as just 39% of China’s GDP, compared to 55% of other major economies, as focusing on exports for decades has put China in a pinch when it comes to long-term financial stability. The DCS displays China’s ultimate goal of transforming itself from being an “export” based economy, however, in the meantime, they are by far the world’s largest exporter by value, as China exported US $2.591 trillion worth of goods around the globe in 2020. That staggering dollar amount reflects a 22.3% gain since 2016 and a 3.7% increase from 2019 to 2020. Go China! Whoops, wrong direction.

The DCS is really nothing that shiny and new, as attempts to boost the local economy’s consumption has been a daunting task in China for decades. Another obstacle worth mentioning, is the success and/or failure of several plans currently initiated to stimulate and build a consumer-driven economy will be determined by bridging the inequality gap. Beijing is cracking down on its billionaires (celebrities too), and much like the U.S., needs to do a better job of managing poverty in general. Actually, to some economic experts, China is considered an upper-middle-income country, even though about a quarter of China’s population is in poverty, which translates to 500 million people. In comparison, 45 million people live in poverty in the U.S., or approximately 11% of the population, but that of course is nothing to brag about.

It will be interesting to see what 2022 brings in the race between China and the U.S. to become much more self-sufficient. If the pandemic has taught us anything, (a little redundant, but true) it’s that our deep-rooted supply-chain shortcomings displayed a need to be much more reliant on none other than ourselves for essential needs. Case and point, look at the nightmare that the lack of semiconductors has created within the automotive industry in the U.S. Ouch.