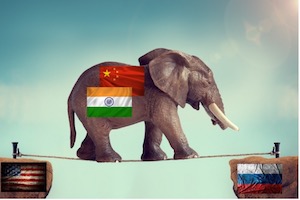 Incursion and World Trade, Part 4: Are India and China Coming to Putin’s Rescue? The New Elephant in the Room

Calculations by top economists worldwide show that Russia is still accumulating about one billion dollars a day on oil and gas exports to fund the invasion. It does beg the question, who is buying the oil?

Yes, sanctions are having an effect on the Russian economy, but not at the pace that some global economists had predicted. Russia’s revenue stream from fossil fuels, its biggest export by far, climbed to records in the first 100 days of its war on Ukraine, fueled (pardon the pun) by a windfall from oil sales. The NY Times recently reported that Russia earned the equivalent of a record 93 billion euros (or U.S. dollars) in revenue from exports of oil, gas and coal in this same 100 days of the invasion. About two-thirds of the earnings came from oil exports. So, who primarily is buying the cheap 30% discounted oil? Well, that would be China and India.

As Russia attempts to navigate the sanctions with those countries willing to take the risk both China and India are emerging as Moscow’s financiers by purchasing large amounts of Russian crude, with what would appear to be little concern of putting themselves in the crosshairs with the West. Who am I kidding? China announced that they had just finished their military drills inclusive of firing missiles over the Taiwan Strait and flying jets around Taiwan as a consequence to the visit from Speaker of the House Nancy Pelosi. They also suspended trade of some fruits and fish imports from Taiwan. The disdain for the U.S. is blatant, India however, one would think could be a little less obvious. My Indian colleagues think we should get our house in order before we criticize anyone else’s, and I do agree. However, speaking of the obvious, prior to the invasion, Russia accounted for about 1 percent of India’s oil needs, but is now in a position to best Iraq as India’s primary source of oil. Russian exports to India  reached 1.15 million barrels a day in June, up from 33,000 barrels a day last year.

Also of note as far as ostensible unity, China has recently completed the building of a major cross-border bridge with Russia.  The Blagoveshchensk-Heihe bridge between Russia and China opened to great fanfare in June of this year (2022). Russia’s Transport Minister Vitaly Savelyev said the bridge would help boost bilateral annual trade to more than 1 million tons of goods.

It isn’t sufficient to say that these country’s relationships are complicated based on essential trade, given what goes on daily in Ukraine regarding Russia’s aggression. Quite frankly, on a geopolitical note, it baffles me that India’s Narendra Modi can be a member of BRICS, an economic partnership of Brazil, Russia, India, China and South Africa, whose aim is to promote peace, security, development and cooperation, and also the QUAD, a partnership of the U.S., India, Japan and Australia, which pretty much promotes the same format, but is really focused on keeping   China in check. It’s sort of a head scratcher…does the QUAD now feel reluctant to discuss specifics with India in the room? BRICS brings together five of the largest developing countries of the world, representing 41 per cent of the global population, 24 per cent of the global gross domestic product, and 16 per cent of the global trade. And the QUAD?  Meh, a more loosely defined group. I wrote an article not too long ago regarding the QUAD. If you are so inclined: https://www.mondaq.com/unitedstates/international-trade-investment/1078846/the-quad-and-international-trade-the-us-australia-japan-and-india

Back to the basics. Buying cheap oil to capitalize on the current geopolitical landscape appears to be a blatant disrespect to E.U. and U.S. efforts to punish the Kremlin. India is attempting to position itself as neutral, but actions speak louder than words, and Narendra Modi holding hands with Putin, Xi Jinping, Bolsonaro, and Cyril Ramaphosa in a recent photo op for the BRICS seemed awkward and untimely. This was Putin’s first entrance back on to the international stage, and everyone present was all smiles. (Putin’s Iran visit followed) China, in my opinion, is moving forward on the “no limits” friendship with Russia whether we see it openly or not.  The rest of the world gets it, there is true value to China in taking advantage of the cheap oil to diversify supplies, and with India, inflation is a problem just like here in the United States. What will come into focus relatively soon however is the dire needs that Russia will request to be filled from these two amicable nations once the western/E.U. sanctions and bans combined come into full domino effect in 2023.

Looking ahead at China and India’s temptation to fill some additional gaps, Russia is far behind the global economy in industries like mechanical and automotive engineering, electronics and computers, biotechnology, avionics, and optics. Without outside investment from developed countries, it’s doomed to the same trip back in time as Cuba. Given that this would be a hard fate to accept, as modern amenities start to disappear, like air conditioning in cars, and air bags for example, one would expect them to turn to both China and India to “find a way” around the sanctions. This is where private sector companies in China for example get large sums of money waved in their faces, the only problem, it will be in rubles. If they do manage to clean up the deal via a currency conversion, there is still the question of what percentage of their business with other nations would they be putting in jeopardy if caught, and who would catch them?

So, what are the ramifications of skirting the western sanctions? Here is a recent example of the U.S. Commerce Department’s Entity List via BIS, the Bureau of Industry and Security. https://www.bis.doc.gov/index.php/documents/about-bis/newsroom/press-releases/3042-2022-06-28-bis-press-release-russia-backfill-entity-list/file (COMMERCE RULE APPLIES POWERFUL RESTRICTIONS DIRECTLY ON ENTITIES SEEKING TO SUPPLY RUSSIA’S MILITARY SINCE START OF INVASION OF UKRAINE) In the meantime, CNN has uncovered Russia’s plundering of gold in Sudan to fund the war effort and skirt the sanctions. They, the Russian’s, operate as Al-Solag which is a Sudanese front company for Meroe Gold, the US-sanctioned Russian mining business, according to five official Sudanese sources and registration documents passed along via an informant, and reviewed by a very brave CNN reporter by the name of Nima Elbagir.

Back to China, granted, the U.S. Commerce Department is watching, but there may also be limits to China’s feeling of bravado when it comes to aiding Russia, foregoing the fact that they are the sourcing agent to the world.  It’s also worth mentioning that based on history, China’s relationship with Russia has for quite a while been somewhat fragile, despite the Olympic time pledge of a “no limits” friendship. “There are no limits in China-Russian cooperation, but there is a bottom line,” Qin Gang, China’s ambassador to the United States, said in a television interview back in March. “The bottom line is the universally recognized international law and norms governing international relations.” I say, just follow the Benjamins. (money)

International law and norms aside, China, are you watching? It seems that you can even sign an agreement with Russia, for example, to allow exports of grain from Ukraine to leave the port of Odesa, as the world witnessed, with an intermediary of Turkey, and have it unwound in record time, as far as international trade related agreements go. At the time, the UN secretary general said the deal offered a “beacon of hope,” heralding food relief for the developing world. Whoops….less than 24 hours after its signing Russian cruise missiles slammed into the harbor. China, India, proceed at your own risk. I have a suspicion that global trade will be significantly realigned within the next decade. If China invades Taiwan, this would be inevitable.

Back to India, one last thing.  Remember the Countering America’s Adversaries Through Sanctions Act (CAATSA), a United States Federal Law that was passed on 27th of July 2017 that imposed sanctions against Iran, Russia and North Korea? I do. This act was meant to prevent trade partners of the United States from entering into bilateral contracts with these three countries. It’s well known that India is engaged in the purchase of the rather sophisticated S-400 missile system from Russia. This part is interesting, and confusing at the same time. Recently, a U.S. legislative amendment granted India relief from America’s CAATSA sanctions regarding its acquisition of the S-400 missile defense system from Russia. India’s defense minister said that they needed it to help deter aggressors like China. I defer to the recent picture of Modi standing in alliance with the BRICS countries, in review, Brazil, Russia, India, China, and S. Africa. Am I missing something here? They are purchasing the missile system to deter China. Was this acquisition discussed with Xi Jinping at the recent BRICS meeting? One of the U.S. Senators who lobbied for the “pass” on the CAATSA for India, said that if the U.S. didn’t grant them this pass on the sanctions violation, it would upset the foundation of the QUAD…..Australia, India, the U.S. and Japan. The BRICS, the QUAD, the CAATSA, I could pile on some additional acronyms to this geopolitical cluster, but what’s the point? I get it, 85% of India’s military equipment has come from Russia over the last decade, and we are trying to convince them to look elsewhere for these supplies, while they have an eye on domestic production. Regardless, sitting on the fence, and business as usual when it comes to condemnation of the invasion of Ukraine, or not, doesn’t sit well with the vast majority of countries. Many are making huge sacrifices to stay aligned with what is right in defense of democracy. Our relationship with China couldn’t get much worse, and the recent (2) hour call with Xi Jinping and President Biden didn’t produce much in the way of progress. I trust that we will not go down this same path with India, but I am only cautiously optimistic.

Fact remains…..post Nancy Pelosi’s visit to Taiwan, I do not think China cares too much right now about not violating any western sanctions. It’s probably in the new plan of anti-western policy. They have recently announced the start of a cold war with the U.S. In a notice published on August 5, the Foreign Ministry announced it has canceled and suspended eight talks and areas of cooperation with the US: The China-U.S. Theater Commanders Talk, China-US Defense Policy Coordination Talks (DPCT), China-US Military Maritime Consultative Agreement (MMCA) meetings, China-US cooperation on the repatriation of illegal immigrants, China-US cooperation on legal assistance in criminal matters, China-US cooperation against transnational crimes, China-US counter-narcotics cooperation, and China-US talks on climate change. (Per China Briefing) Just think, the pandemic used to be the world’s main problem. Now, it’s barely making the top 10.