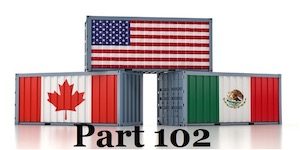 U.S. Customs and Border Protection (“CBP” or “Customs”) recently released a proposed rule (FR 86 35422) which would expand the usage of the U.S. – Canada – Mexico Agreement marking rules found in 19 C.F.R. Part 102 (herein after “Part 102”). Under the proposed expansion of the rule, CBP will apply the Part 102 rules in determining non-preferential country of origin for imports from Canada and Mexico.  The “NAFTA marking rules” as they used to be called will be applied to all non-preferential scenarios when determining whether a good imported from Canada or Mexico has been substantially transformed which results in an article with a new name, character, or use[1]. Id. at 35422. Interested parties had an opportunity to comment on the proposed rule up and until August 5, 2021. Id.  Thereafter, the official rule should be published within the following 60-day period. This expansion is a significant shift away from the current rules in determining non-preferential country of origin and could greatly streamline the process for importers.

The proposed rule change could be quite favorable to the trade industry as it could alleviate some of the confusion and lack of parity between the Part 102 marking rules and Part 134 non-preferential country of origin determinations. Generally, the Part 102 marking rules are based on a tariff shift and/or regional value content analysis which reviews the different components and subcomponents that go into the product to be imported. The Part 102 marking rules are deemed to generally be easier to understand and more broadly apply than the traditional Part 134 substantial transformation rules for determining non-preferential country of origin.  A substantial transformation analysis is based on a case-by-case review and looks at whether a different article is being formed (with a new name, character, or use) which is assessing whether origin is conferred based on the country where the substantial transformation occurs.

While in most cases the USMCA Part 102 marking rules and a substantial transformation analysis yield the same country of origin, other times it does not. This has become even more evident in recent years with the imposition of the Section 301 China tariffs, which require importers to undergo additional country of origin analysis for product imported from the USMCA countries.  If these products contain Chinese origin components or subassemblies, Customs has held in several instances that the imported product has Chinese country of origin under Part 134 for purposes of ascertaining applicability of special duties such as antidumping/countervailing and Section 301.  Accordingly, a dichotomy results where the product could qualify for USMCA preference treatment and marking, but still fall within the requirements to pay the Section 301 duties. Customs ruling HQ H300226 clearly summarizes this conflict.  In this ruling, Customs determined that certain Chinese origin electric motors had the country of origin of Mexico for marking purposes (based on satisfying the Part 102 tariff shift analysis for the tariff classification of the electric motor), but that the motors maintained China as the country of origin for Section 301 purposes as the processing in Mexico did not meet the substantial transformation tests under Part 134. Thus, although the importer was required to mark the electric motors as Mexico for purposes of Part 102 and claim (at that time) NAFTA preference treatment, it was still required to pay Section 301 duties due to the lack of substantial transformation in Mexico under the Part 134 rules. These types of conflicting findings stress the importance of the proposed rule as it would provide more clarity and consistency in country of origin determinations for product imported from USMCA countries moving forward.

If the proposed rule goes into effect, companies should review the country(ies) of origin of their products to determine if any changes may occur. This could be particularly important from a Section 301 China duty mitigation perspective. For instance, a product that formerly did not undergo a substantial transformation in a USMCA country and was accordingly found to be of Chinese origin, may in fact have a different country of origin under the expanded application of the Part 102 rules. Rather than conducting a substantial transformation analysis, businesses will need to review whether the import meets the requirements for tariff shift and/or regional value content as determined under the applicable tariff classification of the imported merchandise per Part 102. Ultimately, this could have the effect of eliminating certain duties on items (possibly Section 301 tariffs) and having one country of origin for both marking and non-preferential purposes. While CBP does not have an obligation to accept this proposed rule change, the effect of such a change would be welcomed among the trade industry as it could relieve importers of additional burdens when making country of origin determinations.

For any additional inquiries, or if you would like to discuss submitting a comment in connection with the proposed Part 102 rule applications, please contact Jennifer at Jennifer@braumillerlaw.com.

[1] Note that the rules in this part do not affect similar determinations made by other agencies, such as the Department of Commerce’s scope determinations in antidumping or countervailing duty proceedings. Id. at 35429.

More articles by this author: https://www.braumillerlaw.com/author/jenniferhorvath/