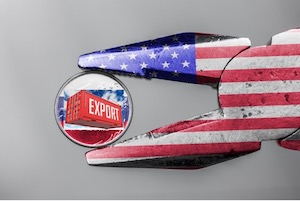 U.S. Bill Introduced to Move Export Controls From Commerce to DTSA
Is This a Good Idea?

On October 28, 2022, on the eve of the mid-term elections, a bill was introduced in the House that, unless you are an export control/compliance nerd, most would not have given it any thought. This bill,  H.R. 9241, called the “Prioritizing National Security in Export Controls Act of 2022” was introduced by Representative Jim Banks, (R-Indiana) and co-sponsored by Robert Wittman, (R-Virginia), and Gregory Steube, (R-Florida).  If passed, the bill would transfer jurisdiction of the export controls under the Export Administration Regulations to the Department of Defense, specifically the Defense Technology and Security Administration (“DTSA”).

From the “if it ain’t broke, don’t fix it” perspective, questions arise as to the motivation for this proposal.   In a review of the bill’s “Sense of Congress” section, the key takeaway is that Congress is concerned that Commerce’s conflicting roles of both promoting US exports, while also protecting the national security of the United States has led to the failure of the Bureau of Industry and Security (“BIS”) to meet the requirements of the 2018 Export Control Reform Act (“ECRA”), specifically those related to preventing exports of sensitive and foundational technologies to China.  The bill further criticizes Commerce for only listing 70 Chinese entities on the entity list “…despite that tens of thousands of Chinese entities may meet the United States criteria for military end-user restrictions.”

The tone of the bill is one that clearly reflects Congress’s frustration with Commerce for failing to fully meet the requirements of ECRA.  However, for those of us engaged in the trade, over the past few years, starting with the Trump administration and continuing in the Biden administration, we have dealt with frequent and significant regulatory changes to the Export Administration Regulations (“EAR”) brought about by the ECRA requirements and the US policy regarding China.  The trade has kept busy revising existing, and developing and implementing new, internal controls to assure compliance with these new regulations. It’s been obvious to the trade that BIS has in fact been extremely focused on meeting the ECRA requirements.

The bill cites a Commerce-led review that BIS routinely rubber-stamps approvals for almost all license applications for technology exports to China.  It is not clear what the Commerce-led review contains, but the most current publicly available BIS data is their 2021 licensing analysis.  These statistics cite an approval rate of 67.4% (3,990 licenses), 1,407 which were RWA’d (returned without action), and 526 denials.  Details of the RWA’s were not provided but typically this action is taken when the applicant fails to reply to requests for additional information, or could also be taken if/when an applicant requests BIS to RWA an application for their own reasons.  It does seem that a 67% approval rate falls short of the implied “high level” of approvals.

Furthermore, the BIS analysis reports an average application processing time of 81 calendar days.  As trade practitioners know all-too well, once the SNAPR submit button is hit, it has started a process that involves multiple agencies, including DTSA, any one of which can impact the ultimate outcome of the review and delay the final result, leaving the applicant in limbo.  Again, it seems the sponsors of this bill do not completely understand BIS’s role in the license application review process and have made assumptions that BIS has complete autonomy on the review outcomes, which is not the reality of the process.

As for the bill’s criticism that there are only 70 Chinese entities on the Department’s Current entity list, despite that “tens of thousands of Chinese entities may meet the United States criteria for military end-user export restrictions”, this is a misleading statement and another example of a lack of understanding by the bill’s sponsors of the EAR.  A quick review of Supplement No. 4, to part 744 (of the EAR), the US Entity List, reveals that under the China section, the current list, last updated on October 21, 2022, encompasses 569 pages, of which 185 pages are consumed with the names of Chinese businesses, institutions, and individuals.  To be clear, not all of the parties on the China section are subject to a complete prohibition of exports and re-exports of items subject to the EAR, but most are.  With each page of the entity list containing from 3 to 5 parties, there are well over 70 entities listed.

It may be, instead, that the bill is referring to Supplement No. 7 to part 744 (of the EAR), the “Military End-User” list, which does contain approximately 70 Chinese entities.  However, this list was created by BIS as a reference tool to supplement exporters and re-exporters’ due diligence processes for compliance with the Military End-Use/User regulations.  In publishing the MEU List, BIS warned that it was “non-exhaustive and does not imply that other parties not included on the List are exempt from regulatory prohibitions.” In other words, exporters must continue to conduct due diligence to ensure that shipments of MEU Items are not made to unlisted “military end users,” or for “military end uses” in China (as well as Burma, Cambodia, Russia, and Venezuela), even if no MEU Listed entity is part of the transaction, or if there is risk of diversion to a military end user or for a military end use.  Seasoned trade practitioners have, for years, addressed and managed the “know your customer” requirements of the EAR which includes screening for suspected military end use red-flags.

In addition to the April 2020 expansion of the Military End Use rule, other notable regulatory changes include the May and August 2019 additions of Chinese telecom giant Huawei and its non-US affiliates, to the US Entity list.  This was followed by the August 2020 changes to general prohibition rule 3 known as the foreign direct product rule (“FDPR”), specifically targeting the supply chain of Huawei which prohibits the export, re-export, or in-country transfer of all items subject to the US EAR if the items are used in the manufacture of items that support 5G technology. The changes to the FDPR essentially prevent the company from receiving any foreign-produced items that incorporate or are produced with controlled U.S.-origin technology or software, without a US license having been obtained.  It is unlikely; however, such licenses would be approved under the entity listing’s stated licensing policy of a presumption of denial.  These actions have, and continue to, negatively impact on Huawei’s global business in the telecom network segment.

Another example of actions BIS has taken to restrict technology exports to China was the December 2020 additions to the US Entity list of China’s leading semiconductor foundry company, Semiconductor Manufacturing International Corporation (“SMIC”), and its affiliates. This action implemented a license requirement to export, re-export, or an in-country transfer of all items subject to the EAR with a “Presumption of denial for items uniquely required for production of semiconductors at advanced technology nodes (10 nanometers and below, including extreme ultraviolet technology); Case by case for all other items”.   Other Chinese foundries were also placed on the entity list.  This action was taken because it had been determined by the U.S. Government these entities were acting contrary to the national security or foreign policy interests of the United States.

And most recently were the massive EAR changes that BIS rolled out in October 2022, which targets China’s semiconductor industry.  The new rules have implemented new controls on advanced computing integrated circuits (ICs), computer commodities that contain such ICs, and certain semiconductor manufacturing items. In addition, BIS is expanding controls on transactions involving items for supercomputer and semiconductor manufacturing end uses. These new restrictions have been implemented over concerns that advanced computing commodities and supercomputers can be used for purposes detrimental to U.S. national security and foreign policy interests, including for weapons of mass destruction, military modernization, and human rights abuses.

Setting aside the previous counter points to the bill’s proposal, it is also important to consider some practical issues that such a dramatic change would raise:

Again, from the trade’s perspective, it is clear that Commerce’s BIS has been extremely active in meeting the ECRA requirements given the significant and frequent regulatory changes over the past few years.  While there remain gaps, most notably addressing the foundational technology criteria, the impact this bill, if passed[1], would have on the trade community would be considerable and likely bring US exports to a halt during the transition period, adding additional woes to the US economy.  Perhaps a better way to resolve Congress’s concerns is to hold Commerce accountable for meeting all of the requirements of ECRA rather than attempting to fix something that is working fine.

Craig McClure recently retired from a 26 plus year career with a leading Japanese supplier of semiconductor production equipment.  In his role as director of international trade compliance, he was heavily involved in export control regulatory monitoring and assuring the company’s internal controls were revised and implemented to meet the compliance requirements.  He also participated on export control committees with two of the industries leading associations, SEMI and SIA.

[1] The bill was referred to the House Foreign Affairs, House Armed Services, and House Appropriations committees on October 28, 2022 but no actions have taken as of the end of November.