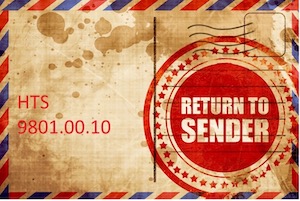 U.S. Customs and Border Protection (“CBP” or “Customs”) recently released updated requirements for importers and brokers regarding HTS subheading 9801.00.10, U.S. and Foreign Goods Returned. Often called a “9801 Claim,” importers can generally use this special duty-free tariff provision when merchandise is exported from and returned to the United States, so long as it is not advanced in value/condition, regardless of country of origin.

In short, this provision means that for U.S. origin products, there is no time limit on filing a 9801 claim for duty-free treatment. For foreign origin products, there is a 3 year time limit. A Chapter 9801 claim is particularly useful for companies who are continuously exporting their merchandise from the U.S. and then subsequently re-importing the goods. This allows companies to only pay duties (if applicable) during the first import of the merchandise, rather than when it is re-imported at a later time.

Now that we understand the basic 9801 requirements, what is the updated guidance?

The new guidance from Customs indicates that the importer has the burden to provide 9801 claims (rather than the broker). However, if the broker is the importer of record for the transaction, they will assume the responsibility and burden to provide the necessary documentation to substantiate the 9801 claim. Because brokers act as agents for the importers, there is a duty of care needed in the filing of entry documents. That being said, the updated guidance makes clear that unless the broker is acting as the importer of record, the importer itself will be required to provide the documents necessary to show that the subject transaction meets all requirements for a Chapter 9801 claim (if Customs makes the request). CBP has also made clear in the updated requirements that if it is found the broker did not provide responsible supervision and control when preparing and filing the entry (9801 Claim), then CBP may address that deficiency through the broker informed compliance process.

In addition to providing these updates regarding the burden of substantiating 9801 claims, CBP has also indicated that a regulatory change to 19 C.F.R. 10.1 has been proposed to align with the Trade Facilitation and Trade Enforcement Act of 2015 (TFTEA). While the regulatory proposal is still pending, Customs has provided a list of certain documents that can be requested from the importer for shipments valued over $2,500. In short, here are the types of documents that can be requested to substantiate a Chapter 9801 claim.

2. In addition to #1 above, additional documents to substantiate the claim for duty-free treatment including a statement from the U.S. manufacturer verifying that the articles were made in the United States.

3. One of the following documents will be deemed sufficient proof of export from the United States for U.S. manufactured goods or foreign origin goods: (1) copy of entry into the foreign country, (2) U.S. export invoice or bill or lading/airway bill, or (3) EEI or AES filing exemption.

5. For U.S. origin goods that were originally exported under a Department of State license that are now being re-imported, formal entry is required regardless of value along with the Directorate of Defense Trade Controls (DDTC) Partnership Government Agency (PGA) message set.

6. For U.S. manufactured aircraft returning to the United States that were sold to a foreign government under the Foreign Military Sales Program, formal entry is required if any maintenance is being performed on the aircraft while in the United States.

7. For U.S. manufactured aircraft returning to the United States that were sold to a foreign government under the Foreign Military Sales program where modifications or enhancements will be made to the aircraft, the following is required for the import and subsequent export of the aircraft: (a) Formal entry is required, (b) At the time of export, the EEI submission is required, citing the Directorate of Defense Trade Controls export license (DSP-5).

For a more concise list of documents/information that would be considered acceptable by Customs to substantiate a Chapter 9801 claim, see https://www.cbp.gov/trade/programs-administration/entry-summary/hts-subheading-9801 and Cargo Systems Messaging Service (CSMS) #49132200.

At a time where Customs enforcement is at an all-time high, it is important for importer’s to be aware of this new burden and updated document requirements. CBP has began taking a more hardline approach towards these types of issues, so it is imperative that an importer maintains, and has readily available, appropriate documentation if it is utilizing a Chapter 9801 claim. It is equally important that brokers be aware of these new requirements as CBP will likely continue its enforcement efforts if it is determined the broker did not provide reasonable supervision/control while making the Chapter 9801 claim.

For any additional inquiries, or if you would like to discuss the updated 9801 requirements in more details, please contact Jennifer at Jennifer@braumillerlaw.com.