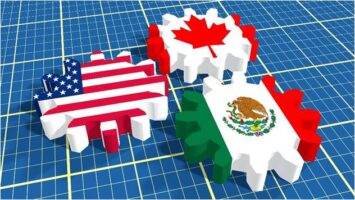 As negotiators from Canada, Mexico and the United States prepare for the eighth round of NAFTA discussions, there is increasing pressure to reach a deal on a revised framework due to several impending deadlines, prompting U.S. Trade Representative Robert Lighthizer to press the NAFTA partners to conclude negotiations on a tentative deal within the upcoming weeks.

First, all parties recognize the importance of reaching a new accord before the onset of key 2018 elections across all three countries.  These elections could potentially alter domestic policies and the resulting negotiating postures of each country.  In Mexico, for example, elections will be held on July 1 to elect a new president, as well as for members of both houses of the Mexican legislature.  In Canada, provincial elections will be held that could alter Canada’s willingness to accept greater inflows of American dairy products under a reform proposal to lower Canadian barriers to American dairy.

In the United States, congressional midterm elections could disrupt the current balance of power in Congress.  This is prompting the Trump administration to seek a new deal on NAFTA quickly, as U.S. law mandates a 195-day minimum for congressional consultations on any new trade agreement before a vote can be authorized.  In order for the 115th Congress to consider a new NAFTA accord, that agreement will need to be in place by June at the latest; otherwise, it would be submitted to the next Congress in January.

Beyond these significant electoral considerations, the NAFTA countries also face self-imposed deadlines. One of importance for Canada and Mexico is the expiration of American steel and aluminum tariff exemptions.  On May 1, the Trump administration’s temporary exemptions on the new 25% steel tariff and 10% aluminum tariff will lapse.  The tariff exemptions for Canada and Mexico were designed as an incentive to encourage compromise on NAFTA revision discussions.  According to the Trump administration, the exemptions could continue if progress is being made during NAFTA negotiations.

With each of these dates looming, if a new deal is not struck before June, the NAFTA reform talks could be pushed back into 2019.  Accordingly, with all countries recognizing the importance of finalizing an agreement soon, gradual compromises on the key issues that have slowed progress in talks so far are being made.

A promising breakthrough came at the end of March when the American delegation reportedly offered to relax their insistence on one of the biggest policy roadblocks.  Previously, the U.S. had insisted that all cars entering the United States for sale to American consumers carry a minimum American-made content requirement of 50%.  However, negotiators are now discussing possible alternatives to the strict 50% content rule that would still increase the percentage of North American content in automobile production.  One idea has been to create new rules that reward NAFTA countries for offering salaries above a certain threshold.  Under this alternative approach, these rewards would be triggered when wages reach a specified point between $13 and $17 an hour.

Similarly, another idea pitched by the U.S. in exchange for foregoing  its 50% car content requirement is the strengthening of worker rights, particularly in Mexico.  In testimony before the House Ways and Means Committee on March 21 U.S. Trade Representative Lighthizer said that he wants rules that guarantee Mexican workers the right to vote for collective agreements by secret ballot.

Meanwhile, Canada has signaled its willingness to move NAFTA talks forward by accepting certain compromises as well.  Canadian Prime Minister Justin Trudeau recently agreed to tougher rules that are intended to ensure China is prevented from dumping steel into the United States by importing it through Canada.  Canadian ambassador to the U.S. David MacNaughton interpreted each of these developments optimistically, remarking on March 20 that “the last two weeks of talks have been more positive than I’ve seen them before.”

While the U.S.’s flexibility over automobile content requirements signal a possible advancement in NAFTA talks, substantial disagreements over critical issues remain.  For example, the U.S. is still pushing for the adoption of a sunset clause, demarcating five-year periods in which any NAFTA country may withdraw if dissatisfied with the agreement.  Moreover, any new NAFTA arrangement will need to resolve disagreements in the dispute settlement process as well as proposals for government procurement procedures.

The eighth round of NAFTA talks are scheduled to take place in Washington, D.C. in April.