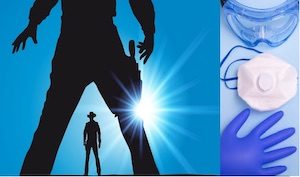 PPE: The Inverted Profit Potential in the Age of the Pandemic

Since the outbreak of the COVID 19 pandemic we’ve witnessed a myriad of businesses in all areas of commerce crash or even succumb all together to the drastic, unforeseen and continuing prohibitions and restrictions which have dramatically changed our ways of life around the world.

While the vast majority of businesses have been in a tailspin since the Spring of 2020, there is at least one area of international trade which has, over the past few months, witnessed the pandemic create a potential panacea of profit.

“Personal Protective Equipment” (“PPE”) represents an inverted projection of profits from the current global economy; but let the buyer (or broker) beware, when attempting to consummate large scale or even medium-level PPE transactions with Asian manufacturers or brokers, there is no such thing as a free lunch, and no such thing as a guaranteed quick buck.

The Art of the Con

This rush-to-immediately close a transaction has always served me well as a valuable bell-weather in my commercial contract representation over the past twenty-five years, as a potential red flag that the deal in post-haste mode may have serious issues.  This was true up until this year…

With the lethality of the COVID 19 pandemic spreading across the country in late Spring, the demand for PPE skyrocketed and as such, the skyrocketing demand resulted in a correlating demand for manufacturing of PPE throughout the world, with an emphasis in Asia.

With this insatiable demand in the U.S. for PPE arising literally overnight, we are essentially witnessing the “21st Century Gold Rush”.  Just as the prospectors in the late 1840s had no prior experience in mining for gold before departing their families and jobs to head for the hills of California, present day, there exists a mass of individuals and companies who only months prior had absolutely no involvement, understanding or knowledge of the PPE industry.  These “21st Century Prospectors” are, like the ‘49ers, now racing one another to the gold in these highly lucrative PPE deals, purchasing from Asian manufacturers to sell to “U.S. Buyers” in both private industry as well as state and federal government agencies.

These U.S. Buyers are issuing demands that the PPE (in these seven-to-eight figure purchase agreements) be ordered, manufactured (oftentimes necessary) and delivered almost immediately.  As may be expected, failure to satisfy these near immediate demands of delivery of these U.S. Buyers will result in those Buyers seeking other parties with whom to consummate transactions, in the very immediate future; the line forms to the left.

The legitimate demands by U.S. Buyers to purchase and receive massive amounts of PPE in such an immediate time frame, has blurred the second element of the con to a level as not witnessed in a single industry.  The desire of brokers and U.S. Buyers to close the transactions quickly, coupled with the immediacy of consummating contracts, including potentially massive payments overseas to secure the manufacturing of the PPE, as well as the exportation to the U.S., make this highly volatile international market and a shark tank for novices.

Now more than ever, counsel experienced in not only drafting and negotiating complex international commercial contracts, but identifying potential bad actors and fraud is required.  Experienced international trade attorneys are not an option when your company makes the decision to venture out to secure its fortune in the Wild Wild East.