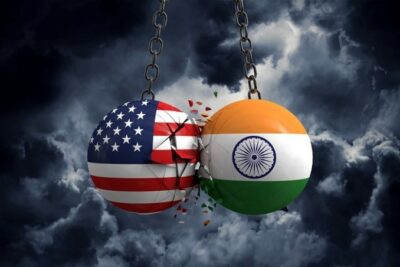 What war? We’re on the right track. The trade deficit between India and the United States has decreased by nearly 7% to USD 1.6 billion in 2018, when compared to 2017. India recorded a decrease in the deficit from USD 22.9 billion in 2017 to USD 21.3 billion in 2018, according to the latest figures by the Bureau of Economy Analysis. So, the trend is a narrowing gap much like China. In comparison, the trade deficit with China shrank 15% in January 2019 to $51 billion, after escalating in December of 2018 to almost $60 billion. China is still at the negotiating table with the U.S., and India has said that it will not launch retaliatory tariffs on U.S. goods at this time, despite Section 232 hurting its exports, instead stating that they are looking forward to further discussions with the U.S. trade representatives in order to come up with a plan that is equitable and beneficial to both parties. Besides, (said with a whisper) New Delhi will not be in any rush to retaliate given the focus on the national election which will take place between April and May.

So, why is the Trump Administration still so upset? Well…actions speak louder than words, coming in May, there goes the GSP, (Generalized System of Preferences) as the POTUS said that India has still not done a good enough job to bridge the trade deficit gap. Therefore, President Trump has started a new battle in his trade wars as he ended the preferential trade treatment for India (and Turkey) that allowed for duty-free entry for up to $5.6 billion worth of its exports into the United States. A little bit of history…the Generalized System of Preferences (GSP) is a renewable preferential trade program dating back to 1976 that allows the eligible products of designated beneficiary developing countries to enter the United States free of duty. The GSP program expired on December 31, 2017, but has been renewed through December 31, 2020, which was effective April 22, 2018.

Actually, President Trump is more than just a little upset by the fact that India and some other countries (insert Turkey again here) were enjoying a trade surplus with the U.S. without giving an ‘equal access’ to American goods in their respective countries. Subsequently, the Office of the United States Trade Representative on March 4, 2019 issued a press release stating that the United States would terminate India’s designation as a beneficiary developing country under the GSP program because it no longer complied with the statutory eligibility criteria. Let’s look a little closer at the bigger picture. Under the GSP program, certain products could enter the U.S. duty-free if beneficiary developing countries met the eligibility criteria established by the Congress. According to the United States Trade Representative (USTR), the total U.S. imports under GSP in 2017 was $21.2 billion, of which India was the biggest beneficiary with $5.6 billion. The GSP program specifically allows duty-free entry of 1,784 products from India into the US, benefiting exporters of textiles, engineering, gems and jewelry and chemical products. Now let’s look at what India considers the little picture. India brushed off the actual impact of the potential of losing the GSP and said the revenue (actual benefit) involved was negligible at only around $190 million, which is essentially lunch money when compared to the actual deficit. Of the 3,700 products covered, India used the concession for only 1,784 (as previously mentioned in this paragraph-just helping India make their point).

Is India upset with the latest move by the Trump Administration? Behind closed doors, very much so. Is this a trade war waiting to happen? (Insert sign here that says “Stay Calm and Keep Trading”) In light of the potential to volley tariffs back and forth with the U.S. like China, India has decided to keep retaliatory tariffs off the table in talks with the United States.  What they do feel however regarding the significance with the latest “move” by the U.S. is that it could simply be an opportunity to embarrass Prime Minister Narendra Modi ahead of general elections this year. I really do not think this is political, in any way, shape, or form… it’s business. President Trump has repeatedly called out India for its high tariffs. U.S. trade officials said scrapping the concessions would take at least 60 days after notifications to Congress and the Indian government. In all fairness though, when I look back on some of the statements the POTUS has made leading up to this, one stands out. One of the examples President Trump had repeatedly used was the tariff that India placed on motorcycles. India exports to the U.S. duty free, and then puts a 100% tariff on Harley Davidson’s exported from the U.S. to India. This was however never really an accurate statement since Harley Davidson actually builds motorcycles in one of its plants in India. Not only that, they are the number one selling bike in the 1,600-cc segment in India, which it currently dominates with over 90 percent market share.

After being corrected, President Trump painted the picture in black and white. “I am taking this step because, after intensive engagement between the United States and the government of India, I have determined that India has not assured the United States that it will provide equitable and reasonable access to the markets of India.” Trade ties with the United States suffered greatly after India adopted new rules on e-commerce curbing how internet retail majors Amazon.com Inc and Walmart Inc-backed Flipkart do business. That was followed by a decision involving companies like Mastercard, Visa, and American Express who are now required to store all information about transactions involving Indians solely on computers in the country. The rule is known as “data localization,” in which a country places restrictions on data as a way to gain better control over it and potentially curb the power of international companies.

“India has implemented a wide array of trade barriers that create serious negative effects on United States commerce. Despite intensive engagement, India has failed to take the necessary steps to meet the GSP criterion,” U.S. Trade Representative Robert Lighthizer said in a press release.  Ambassador Blake said the GSP announcement was not a big surprise for India given that trade tensions have been building over time.

Without a doubt, this could get ugly, but for the time being, India has responded by saying, “Discussions are on with the United States, and given cordial and strong ties, (we are) keeping retaliatory tariffs out of it,” Commerce Secretary Anup Wadhawan said in New Delhi.

As previously mentioned, things are somewhat friendly at the time of this writing, but If tensions rise, experts believe India could respond very soon by implementing retaliatory tariffs. On the China battle front, President Donald Trump and Chinese Vice Premier Liu He did not leave their White House meeting with a new deal to calm their growing trade tensions recently, but Trump said he anticipates an agreement will come together within the next month. This is a good sign for India vs. U.S.