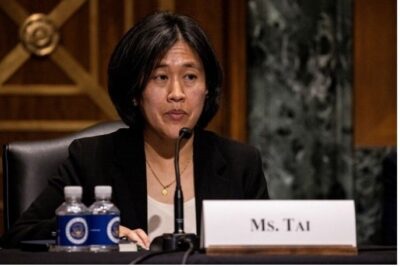 On March 18, 2021, the Vice President, Kamala Harris, appointed Katherine Tai as the United States Trade Representative (USTR). This came after the Senate confirmed Tai by an overwhelming 98-0 vote. Before her appointment as the USTR, Tai served as the chief Democratic trade counsel for the House Ways and Means Committee. In this role, Tai was part of the negotiations for labor rights within the United States – Mexico – Canada Agreement (USMCA). Prior to this role, Tai served in the Trade Representative’s Office of General Counsel from 2007 to 2014, where she eventually became the chief counsel for China Trade Enforcement.

Tai’s recent appointment as USTR is a welcomed site for many importers. The ongoing trade war with China will likely be one of the first issues that Tai will have to address in her new position. Businesses who have been forced to pay the 25% China Section 301 tariff are hoping for some sort of policy change under the new administration. However, it does not appear that Tai’s appointment will aid in reversing the policies that were enacted under the Trump administration. This means that importers can expect to continue to have to pay the China tariffs for the foreseeable future. The current administration will likely continue to follow the same hard-stance course of action until they are satisfied that China is upholding the Phase One trade deal. The Phase One trade deal was focused on China buying more American-made products, a deal that China has not followed through on1.

In her first interview since taking office, Tai stated that removing the tariffs could potentially harm the economy unless the removal is “communicated in a way so that the actors in the economy can make adjustments.” Tai also noted that the China tariffs were put in place to “remedy an unbalanced an unfair trade situation,” so it is unlikely the Administration will be moving quickly to reverse the current tariffs. Aside from the Section 301 tariffs, Tai will need to address other ongoing trade related issues. These range from the Airbus-Boeing WTO dispute to other Section 301 investigations such as digital tax services, Vietnam currency conversions, and civil aircraft tariffs, among others. If Tai and the new administration elect to take a similar approach to other Section 301 investigations, it is likely the tariffs will not be going away any time soon.

For any additional inquiries, or if you would like to discuss who Katherine Tai is in more detail, please contact Brandon French at Brandon@braumillerlaw.com.