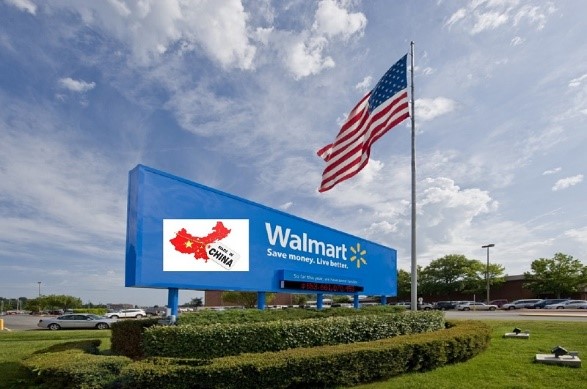 In a letter to U.S. Trade Representative Robert Lighthizer, the company said expanded tariffs on Chinese imports would hurt its customers, its suppliers, as well as the U.S. economy.

“The immediate impact will be to raise prices on consumers and tax American business and manufacturers,” Walmart said.

The administration declined the recommendation and on Monday, 9/18, it moved forward with 10% tariffs on those products and $200 billion worth of other imports from China. I wonder, do 54 lobbyists, and a dozen lobbying firms working on behalf of Walmart in D.C. still have jobs?

The tariffs, which took effect on 9/24 will jump to 25% at the end of the year (1/1/2019). The latest round of tariffs brings the U.S. trade war with China directly to Walmart, the country’s largest retailer, and impacts many of the everyday products it sells. Given the leverage that Walmart has, one would have thought that the Trump Administration would have at least had them over for dinner first before refusing their request.

In the “big picture” of retail size, Walmart currently has 11,718 stores and clubs operating in 28 countries serving an estimated 270 million customers each week, making them #1. Obviously, the buying power they have, and the number of customers they serve in the U.S.  (62% of Walmart’s $478 billion revenue in annual sales comes from U.S. operations) would lead one to believe that they are treated like royalty by the various companies they do business with in China. When the Leer jets from Bentonville land with the Walmart procurement group on board, the red carpet rolls out, and rose petals are thrown at their feet. (A lot of group pictures are taken as well).

These meetings with the Chinese vendors have been getting tougher as Walmart must navigate the new trade landscape as the profit margins may be thinning in the trade war with China. (Yes, let’s call it like it is, a war). Beijing just added $60 billion of U.S. products to its import tariff list on 9/19 in retaliation for President Trump’s planned levies on $200 billion worth of Chinese goods. Beijing will impose levies on a total of 5,207 U.S. products – ranging from liquefied natural gas to certain types of aircraft, as well as cocoa powder and frozen vegetables – at 5 and 10 percent, instead of previously proposed rates of 5, 10, 20 and 25 percent, the finance ministry said. Both countries’ tariffs came into force on Sept. 24.

In the meantime, what many U.S. Walmart shoppers are unaware of (but may soon discover) is that roughly 80% of the merchandise they purchase there is imported directly from China.  Looking out for those consumers Walmart explained to the administration “Either consumers will pay more, suppliers will receive less, retail margins will be lower, consumers will buy fewer products, or forego purchases altogether. Still, there was just the proverbial sound of crickets, as the note had no effect on the outcome. So, when do they start to get really mad and do something drastic? Afterall, they are the giants of U.S. consumer retail buying, and the fact remains, of the company’s $500 billion in sales last year, about $50 billion was linked to Chinese imports or investments in Chinese businesses, and that is not going to change anytime in the near future, as Walmart continues to invest millions in the Chinese market*.

As an alternate plan of action, if the trade Attorneys for Walmart were testifying in D.C. for exclusions and/or exemptions that would be quite a challenge to negotiate as the standard question would be, ”Can you not reasonably source these same products from another country?” You only have a few minutes to speak, if you are (and you may not be) asked a couple of questions by the panel. (I know this because some of our Attorneys are also testifying on behalf of our clients in D.C.) So, instead of complaining logically (in only a few minutes) that it took years to develop these relationships monetarily speaking, one needs to consider a specific plan of action, and have concise answers that would be reviewed as favorable by the committee.

We all know that the Trump administration is using tariffs to push companies to manufacture more goods in the United States, but many experts in the National Retail Federation say the administration’s thinking is flawed and carefully planned supply chain plans can’t be redrawn overnight. With Walmart’s huge foot print in China, this would be a massive undertaking, and an incredibly expensive endeavor that would also take years to accomplish.

In the grand scheme of things, retailers order their products at least six months to a year in advance, and of the 1400+ companies who have testified to date for said exclusions, they may be left scrambling to find new options for 2019. The Department of Commerce has been slowly responding to over 22,000+ applications that companies have filed for individual products. The problem is, the process lends itself to a huge backlog, as an example, it allowed one company to file for 1,168 exclusion requests. Ugh!

“The administration continues to overestimate the ability of U.S. companies to shift supply chains out of China,” the trade group said in its letter Lighthizer. “Global supply chains are extremely complex. It can take years to find the right partners who can meet the proper criteria and produce products at the scale and cost that is needed.”

Now, from time to time, I digress, but getting back to Walmart. In their own version of “The Art of Negotiation” back in 2013 Wal-Mart announced a plan to purchase “$250 billion in products that support the creation of American jobs” by 2023 via increasing purchases of U.S. manufactured goods. Obviously, this is aligned with the POTUS’s main plan, but some experts are having a difficult time assigning few actual U.S. manufacturing jobs that have been created as a result of this commitment. Nonetheless, Mr. President, Wal-Mart remains, by far, the top importer of ocean shipping containers in the United States with total imports of more than 775,000 container-equivalents (TEUs) accounting for approximately 11.2 percent of total U.S. goods imported from China annually, which should translate to a front row seat for discussions with the POTUS (with Chinese food served) on how to work with them and their Chinese counterparts.

At this juncture, what is worth noting is that in an effort to show some compromise, and to mitigate the impact of the Trump Administration’s most recent list of proposed tariffs on Chinese goods, a little over a month ago Walmart asked its beauty vendors to look outside China, according to a report from Reuters. In a commentary on tariffs via Walmart CFO Brett Biggs, during the company’s second quarter earnings presentation, “While we know questions persist about tariffs, the potential future impact is difficult to quantify,” he said. “We are closely monitoring the tariff discussions and are actively working on mitigation strategies, particularly in light of potentially escalating duties.” List #3 has now been launched. Ouch!!

A power lunch with the POTUS, Walmart’s top executives, and several of their key Attorneys in the 320-person legal department in Bentonville, should be on the agenda, as the meeting between the Trump Administration and China has been cancelled. China said that they will not be sending vice-premier Liu He to Washington any time soon. Is there room for a list #4 in the first quarter of 2019?

*Worth noting. Walmart also recently invested (August of 2018) $16 billion for a 77% stake in India based ecommerce site Flipkart. Walmart is now poised to compete globally with stakes in not just Flipkart , but also investments in JD.com and Dada-JD Daojia in China, an alliance with Rakuten in Japan, and acquisition of an online marketplace Corner-shop in Mexico and Chile.