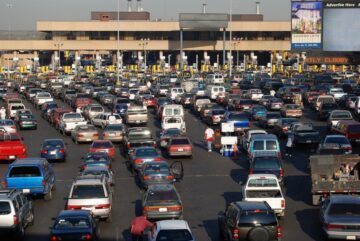 Whether you move goods via trucks, trains, planes, or cargo ships, it is essential that you begin to view the shipment of goods in terms of security for the entire journey. Cross-border shipping is on the rise according to Customs and Border Protection (CBP), and adjustments at border bridges are being  managed as fast as they can be approved.  Being a CTPAT (Customs Trade Partnership Against Terrorism) certificated participant is in  large part an advantage to keeping cargo moving smoothly through the ports of entry, in particular along the Southern border.

Mexico was reported to be the United States’ second-largest goods trading partner, with $538.1 billion in total (two-way) commodities traded in the past year, surpassed only by China, according to the U.S. Census Bureau.   Records indicated that in 2020, 2.3 million trucks and 239,017 rail containers crossed the border at the Laredo port of entry.  The World Trade Bridge, pictured above, is one of two commercial bridges in the Laredo System.  It is estimated that this entry point averages approximately 10,000 commercial trucks per day and the number is increasing steadily as we globally emerge from the COVID-19 pandemic.  CBP officers report daily seizures of narcotics, which, in and of itself, is cause for delay in the border clearance process.  If the importer is CTPAT certified and uses a FAST, (Free and Secure Trade) qualified carrier, the vehicle  can be processed thru the FAST lane.  Having this access may avoid lengthy wait times and holdups due to the increasing enforcement activities.  The World Trade Bridge complex at Laredo is currently making improvements to the crossing that includes adding four new FAST lanes which are scheduled for completion by the end of 2021.

It is because of the noted significance of the movements at the Southern border, the volume numbers and the valuation of goods that CBP began a focused effort to decrease the time it takes to process entering cargo.  Moving shipments swiftly and efficiently thru these ports without compromising security effectiveness became a  primary goal of Customs considerations.

To that end CBP is engaging with industry technology developers and Mexico Customs to implement more effective ways to process cargo.  CTPAT members are first in line for the benefits of these programs.  Highlighting a couple that have taken center stage will underscore the reasons for participation in the CTPAT program.

CBP agents performed approximately 6 million NII scans in FY20 that directly led to the seizure of 216,203 pounds of drugs, $3 million in undeclared currency, 1,655 guns and over 4,500 unauthorized migrants being transported illegally in cargo trucks since October of 2020.  The U.S. Department of Homeland Security is working diligently to find effective, non-intrusive ways to search containers and trucks crossing into the U.S.  CBP cargo lots at the southern border are extremely busy, but you do not often find CTPAT qualified entities represented in the intense inspection procedure.  It is definitely worth the time to be a part of this program if you are regularly transiting goods at U.S. land border crossings.

Click the link: https://www.flipsnack.com/braumillerlaw2021/braumiller-law-consulting-group-digital-magazine-june/full-view.html.  Once you initially click, the best view will be “Full Screen” mode, which is located in the lower right hand corner of your screen.

Other articles from Judy Davis