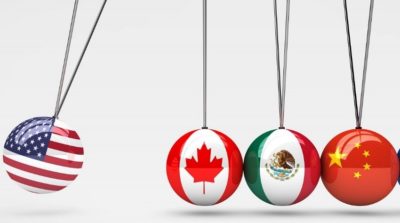 In Mexico, the manufacturing industry, formerly known as PITEX or maquila, and currently known as IMMEX (Manufacturing and Export Services Industry), has had considerable growth due to NAFTA.  This was mainly because of the low labor cost, the import duty reduction, and the preferential treatment for goods produced by this industry, and subsequently exported or returned for consumption to the United and Canada.  To produce these goods, IMMEX temporarily imported materials such as parts, inputs, components, etc. originated in the NAFTA region or from elsewhere.  To prevent non-NAFTA materials from benefiting from the preferential treatment, the NAFTA drafters, included Article 303, which became effective until January 1, 2001.

From the Mexico perspective, this article states that NAFTA countries cannot refund, reduce, or waive import duties for non-NAFTA originating materials temporarily imported by an IMMEX, incorporated into a finished good, and subsequently exported for consumption to any of the NAFTA countries.

IMMEX operates under a customs regime called “temporary importation for the manufacturing, transformation, and repair by maquila or export programs”.   Its customs operations are mainly governed by Articles 108 through 112 of the Mexican Customs law, Chapter 4 of the Mexican Customs General Rules, as well as the IMMEX decree.  These legal provisions are closely related to NAFTA article 303.

In accordance with the above, and the effect of NAFTA Article 303, temporary importation of non-NAFTA originating goods is subject to the payment of import duties, provided they were:

The importer of record may pay such import duty:

The applicable import duty may vary depending on any certification of industry sector program the company may have, or even depending if there is a free trade agreement between Mexico and the country from where the non-originating good is from.

Recently, the United States initiated trade investigations under section 301 and increased the import duty to 25% on goods made in China when imported into the United States.  Some of the goods are from the aerospace, information systems, robotic and machinery industries, classified under chapters 84, 85, 86, 87, 88, 89 y 90 of the U.S. Harmonized Tariff Schedule.

Considering some IMMEX incorporate Chinese materials into finished goods subsequently exported for consumption, or returned to the US or CA, one of the questions that may arise is, how will Section 301 impact these IMMEX operations?

The answer can be very short:  It depends, because one would have to analyze the Harmonized Tariff Code, the import duty, production process, temporary importation period, IMMEX category, and of course, the documents supporting the origin of all materials incorporated into the finished goods, among other things.

However, if an IMMEX is incorporating any Chinese component classified under the above-mentioned chapters, it is possible Section 301 and NAFTA article 303 will impact the company finances.

Although Customs is not performing many audits or inspections related to Article 303, it is possible it will want to make sure companies comply with Article 303 considering the new U.S. tariffs on specified Chinese articles.   Now is the time for IMMEX, its suppliers and buyers, to perform an assessment of operations to ensure proper compliance and that related records are in good shape.  This will prevent unfavorable surprises, or significant penalties or sanctions.