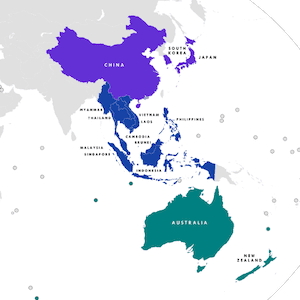 On November 15, 2020, leaders of fifteen Asia-Pacific countries signed the Regional Comprehensive Economic Partnership (RCEP) via a virtual signing ceremony.  Members of the RCEP include Australia, Brunei, Cambodia, China, Indonesia, Japan, Laos, Malaysia, Myanmar, New Zealand, Philippines, Singapore, South Korea, Thailand, and Vietnam.  To many, the significance of the RCEP is that it will connect approximately thirty percent of the world’s population and strengthen economic integration between the member countries.  Specifically, RCEP aims to progressively lower tariffs, increase investment, and streamline Customs procedures to facilitate the free movement of goods.  The RCEP will also provide a single set of origin rules for establishing preferential tariff treatment that will more than likely reduce complexity and compliance costs for participating members.

So, what exactly does the RCEP trade deal mean to the United States?  To address this question, it is also important to consider the impacts of the United States withdrawing from the Trans-Pacific Partnership (TPP).  The TPP was part of the Obama Administration’s strategic pivot towards Asia.  It was intended to build stronger trade links with TPP member countries and establish higher economic, environmental, human rights, and labor standards that stood to bolster U.S. influence and competitiveness in the Asia-Pacific region.  If it had been enacted, the TPP was set to become the world’s largest trade deal, covering forty percent of the global economy.  Analysts say the TPP would have ensured that the United States played an influential role in the region as the deal would have advocated for deeper reforms, which participant countries would have been incentivized to adopt in order to gain access to TPP markets.  Authors of the deal also hoped that, if China’s major trading partners joined the TPP, it would have incentivized China to join as well and comply with higher standards set by the United States.

However, when the Trump Administration officially withdrew the United States from the TPP in January 2017, the eleven remaining countries forged ahead, creating a new version of the deal known as the Comprehensive and Progressive Agreement for Trans-Pacific Partnership (CPTPP), and left the United States on the sidelines.

With the implementation of the RCEP, it lays the foundation for deeper cooperation between member countries in the Asia-Pacific.  A notable fact is that the RCEP includes China, South Korea, and Japan – the largest economies in the region – and is the first trade agreement that includes all three countries.  To many, this is a pivotal change as the three countries had to overcome long-standing political differences and find common ground on economic issues in order to bring the RCEP to fruition.

With the United States notably absent from the RCEP, the U.S. may find itself having a less influential role in the region, as well as having less leverage to pressure China into modifying its trading and economic practices.  At this time, President-elect Joe Biden has said that the United States needs to negotiate with allies to set global trading rules to counter China’s growing influence.  While next steps for the new administration are not clearly laid out yet, many analysts argue that the implementation of the RCEP might force the next administration to rebuild ties in the Asia-Pacific and make it more of a key issue, especially if the United States wants to be an influential player in the region.