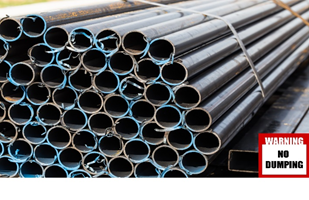 On April 19, 2017, ArcelorMittal Tubular Products, Michigan Seamless Tube, PTC Alliance Corp., Webco Industries and Zekelman Industries filed petitions with the United States International Trade Commission (USITC) and the Department of Commerce (DOC).  The imposition of antidumping/countervailing duties (ADD/CVD) on imports of such tubing could have a significant impact on U.S. importers.

Their petitions claimed material injury or the threat of material injury from cold-drawn mechanical tubing imports and requested remedies for those injuries.  Specifically, the petitioners alleged that these imports are being sold at less than fair value (LTFV) in the United States by producers from China, Germany India, Italy, Korea, and Switzerland.  The petitions contended that these injuries are illustrated by reduced market share; underselling and price suppression; lost sales and revenues; decreased production, decreased capacity utilization; declines in the employment of production related workers, and their corresponding wages and hours worked; and declines in their financial performance.

As a consequence of these imports being sold at LTFV, the petitioners are requesting antidumping duties be issued by USITC and DOC.  In supporting their claim for duties, the petition estimates the following dumping margins among producers of the six countries identified in the petition:

In addition to its request for antidumping relief, the petitioners further alleged that China and India are subsidizing producers of cold-drawn mechanical tubing imports in violation of the WTO’s Agreement on Subsidies and Countervailing Measures.  In particular, the petition asserts the Indian and Chinese governments offered grants, special tax benefits, and preferential export financing that also resulted in injury to domestic firms.  Consequently, the petitioners also requested appropriate countervailing duties be issued.

In response to the petition, the USITC held a public conference on May 10, 2017 where all parties and their representatives were asked to appear.  Following this conference, through its May 16, 2017 notice in the Federal Register, the DOC announced that it found adequate evidence to meet the statutory requirement for initiation, signaling the opening of further investigation into the potential for imposing antidumping and countervailing duties.  A few weeks later, on June 5, 2017, the USITC published an affirmative preliminary determination, finding a reasonable indication that cold-drawn tubing imports are materially injuring domestic producers.  With the USITC’s finding of a reasonable indication of material injury to American industry, the investigation continues and shifts back to the DOC.  Accordingly, the DOC is now evaluating whether that injury was caused by LTFV imports and subsidization by foreign governments.

The statutory timetable for antidumping and countervailing duty investigations is set forth in Title VII of the Tariff Act of 1930.  Applying this timeline to the remainder of investigation, the USITC estimates the following release dates:

If the DOC investigation does find that imports of cold-drawn manufactured tubing from the six countries listed above are entering the United States at LTFV, and with unlawful government support, then antidumping and countervailing duties will be imposed.  Domestic producers can expect these tariffs to be effective as soon as the DOC releases its respective preliminary determinations.  Given the target dates presented above, countervailing duties, if authorized, would take effect on, or shortly after, September 18, 2017.  Similarly, if approved by the DOC, antidumping duties would begin on, or shortly after, November 15, 2017.

While critical circumstances were not alleged in the petition, and thus not currently under consideration by the DOC, the petitioners can still request a finding of critical circumstances at any time up until 20 days before the DOC’s final determination.  If critical circumstances are alleged, and proven later in the investigatory process, the DOC can retroactively impose countervailing and antidumping duties to all unliquidated entries.  If imposed, these duties would become active up to 90 days prior to the date that the DOC issues findings of trade violations as part of their preliminary determinations.  According to the timeline above, this would mean that any critical circumstance duties could reach back three months prior to September 18th in the case of countervailing duties, and three months prior to November 15th in the case of antidumping duties.