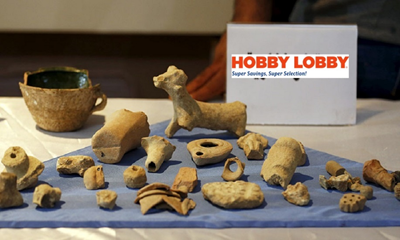 Hobby Lobby has agreed to a settlement with the U.S. Attorney’s Office that requires the company to pay fines totaling $3 million, in addition to the surrender of a trove of ancient Middle Eastern artifacts, and the installation of rigorous new internal compliance standards to avoid future trade law violations.  The settlement is the result of trade violations from December 2010, when Hobby Lobby entered into an agreement to purchase over 5,000 cuneiform artifacts for $1.6 million.  The shipments, however, were not labeled with the correct country of origin, used inaccurate valuations of the item’s worth, and incorrectly described what exactly was being imported.

The illegal shipments were marked with labels like “ceramic tiles” and “samples”, and offered paperwork designating Turkey and Israel as the countries of origin.  However, federal prosecutors believe that many of these artifacts were archaeological antiquities taken from protected Iraqi historical sites.  To prevent the illegal removal of these artifacts from historic landmarks in Iraq, U.S. law bars their possession or sale.

Hobby Lobby responded to the settlement through its CEO Steve Green, who said that the company: “should have exercised more oversight and carefully questioned how the acquisitions were handled.”  He continued: “We do what we can, but there is the risk that after the fact, you find out that it wasn’t appropriate for us to buy it.”  Cary Summers, the curator whose museum would have likely housed the artifacts, described the trade violations this way in his interview withThe Atlantic: “It was naïveté.  If you don’t know what to look for, what questions to ask, you don’t even know how to do due diligence.”

As part of its agreement with the Department of Justice, Hobby Lobby has pledged to set up stronger internal policies to better manage purchases of cultural property in the future and to provide more thorough training to its personnel involved in those acquisitions. More interestingly, the settlement mandates that Hobby Lobby hire qualified outside customs counsel, as well as customs brokers, to help oversee compliance with trade regulations.  While this type of corrective measure is often required in export penalty cases, it is rarely seen in customs cases.  Finally, Hobby Lobby must submit quarterly reports to the government describing any cultural property it buys over the course of the next eighteen months.

The Hobby Lobby settlement illustrates the importance of establishing effective compliance controls and the potential costs associated with government penalties for violations.