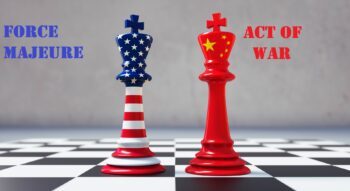 The month of March has brought a deluge of cancellations of international conferences, travel and severely affected markets around the world, all due to the spread of “COVID-19” – the newest strain of the “Coronavirus” which was first discovered last December in Wuhan, China.

The Force Majeure Section is nothing more or less than an insurance policy which is intended to establish instances of release for one or more parties to a contract, should identified outside events, natural or manmade, render a party’s ability to fully perform its obligations under a contract as impossible, either temporarily or permanently.

Under a Force Majeure Section, should one or more identified substantial or catastrophic event(s) occur to either delay or prevent the performance or satisfaction of the contract by one or more parties, under the contract, that party(ies) would be relieved from its performance obligations, and would have a valid defense in the event of litigation or international arbitration.

Events that May Be Included in a Force Majeure Section:

There are several types of events which are usually included in Force Majeure Sections, but which may be poorly defined, or not defined at all.  For example, “Natural Disasters” are often not well defined within the boundaries of the contract.  There are well established events which fall within this parameter such as hurricanes, tsunamis, earthquakes and tornadoes, but the failure of a contract to provide a comprehensive definition, as noted in this article, can be extremely problematic.  The other area of exemption usually included in a Force Majeure Section is man-made/created events such as war, embargoes, sanctions, and/or often ill-defined , or not-at-all defined “Acts of War” or “Hostile Actions” by a government which directly affect the performance of the contract.

The Devil is in the Details:

As with every other section in any international commercial contract, the terms contained therein are only as effective as the depth of their respective definitions, or to put it another way – the devil lies in the details.

Failure to sufficiently look forward to potential events or occurrences, including contemplating current global geo-political events and potential events, and then specifically and clearly include these identified issues in the definitions and examples of a Force Majeure  Section may in the end, do as much to create litigation or international arbitration as to prevent it.

For instance, a trip produced by a travel agency to Italy that provided for the full refund of traveler’s paid expenses to the agency in the event of “Natural Disaster” – failed to define the term of art – Natural Disaster.  Clearly, the customers now look to the spread of COVID-19 in Italy and the Italian and U.S. governments’ recent actions as established facts to confirm that COVID-19 is in fact a Natural Disaster which requires the travel agency fully refund each customers’ paid expenses to the agency.  However, the long history of Force Majeure Sections in commercial contracts of all types, do not necessarily establish such an assertion to be certain.  What is certain is that a properly and clearly defined drafted definition of what the travel agency intended the term of art Natural Disaster to mean, would have resolved one way or another the dispute as to whether or not COVID-19 qualified as a defined Natural Disaster.  The historical concept of Natural Disaster has more than not been that of a localized natural event or occurrence – not a worldwide event.  Even if a worldwide pandemic would be deemed to be included in this particular undefined term of Natural Disaster, the fundamental question remains still of who or what person, people, or entity(ies) under the terms of the Force Majeure Section is/would be authorized to make the ultimate determination and pronouncement that COVID-19 has become a qualified “Worldwide Pandemic” in order to require the refunds?

This issue of definitions (or lack thereof) arose in multiple Force Majeure Sections in international commercial contracts in the summer of 2018 with the implementation by the Trump administration of “301 Tariffs” against a vast array of businesses within the Peoples Republic of China (“PRC”).[1]

I testified in Washington, D.C. for Braumiller Law Group on behalf of a number of clients who were seeking exclusion from these substantial tariffs for products or components that were being purchased from companies in the PRC.  In many instances these 25% tariffs threatened to place our clients (who had no other options in the world but to buy their products or components from PRC companies) between the proverbial rock and a hard place as they continued to fulfill their contractual obligations and in doing so, were running an ongoing deficit due to the 25% 301 tariffs and ultimately many were facing bankruptcy.

The Time to Review Your Company’s Force Majeure Sections is when the Contract is Being Negotiated and Drafted – NOT later when an Unforeseen Event has Occurred:

The primary, and often-times only real opportunity to fully review, modify, and draft an improved Force Majeure Section is during the underlying commercial contract negotiation, or during a re-negotiation of any contract.  As with any term, definition, right, or obligation set forth in any contract, once a dispute has arisen, the time to negotiate and clarify has in all likelihood passed, and the parties may be faced with a dispute that is simply not resolvable save for litigation or international arbitration.

[1].  The 301 Tariffs were enacted this summer and encompassed a massive-if-not-total cross-section of products and components manufactured in the PRC and imported into the United States.  The 301 Tariffs represented an increase in “Group 1” and “Group 2” of 25% and a tariff increase for “Group 3” of 10%.