As you sip your frothy Cappuccino while basking in the glow of your most recent quarterly report which shows a dramatic increase in sales in your China division….your assistant bursts into your office with a letter from….the Department of Justice!!!…hmmm….I wonder what they want???

While Foreign Direct Investment (FDI) in China has lost some momentum, having decreased from $116 billion to $111.7 billion from 2011 to 2012, China still remains one of the most preferred locations for corporate investment. Along with these investment opportunities, some multi-national companies such as the British pharmaceutical giant Glaxo Smith Kline (GSK) are finding themselves in the headlines faced with allegations of violations of the FCPA[1] and Chinese anti-bribery laws.

When a multi-national decides to enter China through FDI several underlying forces could negatively impact the organization:

Although China is attractive for FDI, multi-nationals must know with whom they are doing business, and be aware of the inherent risks of corruption. Transparency International’s Corruption Perceptions Index (CPI) ranks China a relatively poor 39th.[2]

With regards to corruption risk, what would a multi-national expect when doing business in China? In the GSK case, the company is being investigated by Chinese authorities for colluding with a travel agency to funnel money to government doctors using fraudulent invoices.[3] In 2012 Eli Lilly had similar issues as its sales force was submitting expense reimbursements used to get cash to pay for bath houses and meals to government doctors in China in return for the doctors purchasing Eli Lilly products.[4]

The Pharmaceutical industry is not alone in struggling with corruption in China. In 2012, Morgan Stanley’s real estate and fund advisory Managing Director, Garth Peterson, colluded with a former chairman of a Chinese state owned enterprise, Yongye Enterprise Group. They paid each other “finder’s fees” of $1.8 million that Morgan Stanley owed to third parties. In exchange for the fees and personal interest in Morgan Stanley’s investments, the Chinese official brought business to Morgan Stanley. [5]

Although the FCPA has been a federal statute since 1977, the last 10 years has shown a dramatic increase in enforcement activities by both the SEC and the DOJ for both public traded entities on the United States stock exchanges and US Domestic Concerns which are privately held entities.[7] 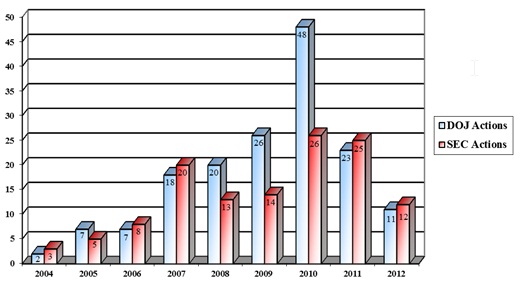 Despite the most recent decrease from 2011 to 2012, the DOJ has sent out an FCPA Guideline to demonstrate its focus of continued rigorous enforcement. [8] The DOJ and SEC continue to bring cases against companies for bribery in China.

Before China’s economic reforms in 1978, China’s were similar to the pre-1990’s Soviet economy where state owned entities dominated the major industries and were commanded and controlled by the central government. Although economic reforms have decreased their share of total economic output (80% pre-1978 and 15% post millennium), the state owned entities are a major contributor to the industries such as oil and gas, steel, telecom, banking and transportation. [9]

The definition of a “foreign official” in China can be more encompassing than in other countries. Continuing with the DOJ and SEC’s broad interpretation of elements of the FCPA, a “foreign official” in China could include the large population of Communist Party of China (CPC) members. The CPC runs parallel to the People’s Republic of China (PRC) in terms of structure and membership. The two entities are difficult to separate and appear to be indistinguishable.[11] CPC members may have businesses in the private sector and if an MNC does business with, or acquires the CPC owned company or CPC employee, that CPC member may use political connections/favors to obtain business.

Most multi-national companies doing business abroad rely on a thorough “due diligence” to surface or avoid FCPA issues. While due diligence is essential, in practice it has become increasingly difficult in China. As of January 2013 the Chinese Government put a halt on the free accessibility of corporate records kept by the Administration of Industry and Commerce (AIC). The AIC is a regulating body that keeps financial, and ownership information on all companies in China. This restriction to corporate information was a response to several publications of fraudulent Chinese companies and political figures by the media and investment informational companies. [12] This restriction will create serious difficulties in investigating the following:

It should be apparent to any company considering or participating in FDI in China that the cost of compliance should be greater than zero. “Top down” style corporate level compliance programs are unlikely to be effective in addressing these risks. While a robust global anti-corruption program is important, dealing with high-risk countries such as China requires compliance programs that must be implemented and overseen at the local level. This will require a program to be tailored to the particular risks and culture of that local area, as well as having compliance personnel in country.

At the very minimum, a robust and effective compliance program in China should include the following:

IV.        Due Diligence on Potential Business Relationships in China

With the recent limitations on obtaining basic company records in China, due diligence has become more difficult. It is nonetheless still required as a basic element of an effective compliance program.

ii.    GSK’s investigation involves use of a third-party vendor to disguise illegal payments.  Companies might address this issue by analyzing accounts payable vendor master files to identify either large or frequently recurring payments in historically high risk services such as consulting, travel, legal and professional fees. Any suspicious transactions would then be compared to documentary evidence and investigated further.

Companies that recognize the risks and invest in realistic, practical, and robust compliance programs will realize significant financial benefits including:

China is certain to continue to be a huge opportunity for FDI. In order to be successful in this market, multi-national companies must understand that the significant investment in FCPA and anti-fraud compliance is an essential part of their overall strategy. U.S. and local regulators recognize that companies operating in China and other high-risk locations are fertile ground for fines and penalties.   The enforcement of FCPA and local anti-bribery laws continues to increase.

It is worth reviewing the Morgan Stanley FCPA case. Morgan Stanley cooperated completely and was investigated vigorously. Its compliance program had identified Yongye Enterprise Group as a state owned enterprise and notified Mr. Peterson some 35 times. Mr. Peterson ultimately ignored the warnings and disregarded the company’s policies.  He has been charged criminally for his violations of FCPA and the Investment Act.  However, regulators declined to charge Morgan Stanley as it had an effective compliance program in place, conducted a thorough investigation when the matter was discovered, and fully cooperated with authorities. The impact of this decision is a savings of many millions of dollars in investigation costs, legal fees, and potential fines and disgorgements.[15]

If the DOJ and SEC want to continue to collect fines and penalties and grow their budgets they will probe into the companies that are investing heavily in the high risk countries like China where ease of business is high. If you do not want to be the manager that just received the DOJ letter, compliance is the key.

[1] The Foreign Corrupt Practices Act (FCPA) prohibits the paying of a foreign official with anything of value to obtain or retain business.

[2] Zero means highly corrupt and 100 means limited corruption. To provide points of reference, Afghanistan and Somalia are 8 on the CPI and Denmark and Finland are 90. Although China is not the highest in corruption, it remains a high-risk country.

[12] Exploring the impact of China’s clampdown on public records, MAY 2013, “The Fraud Examiner”, by Peter Humphrey, CFE

[14] In determining fines and penalties, DOJ and SEC will consider the entity’s compliance program, whether they self-reported, and how sufficiency of the company’s investigation.

[15] By way of example, Wal-Mart recently disclosed that its own FCPA investigation costs had reached $230 million as of March of 2013, equating to approximately $600,000 per day in professional fees, and has continued to grow. Wal-Mart has not yet been assessed penalties or fees related to the matter.