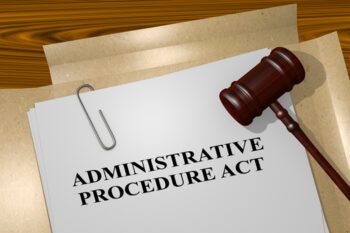 We are well aware of the frustration many exporters face when managing the challenges created by export control regulations.  These regulations are vast, difficult to dissect, and at times, exceedingly vague.  To make matters worse, exporters do not always agree with DDTC and BIS on their interpretation of the regulations or with the administrative actions taken to enforce them.  Although practitioners in the export control field don’t always agree with DDTC or BIS, we usually recommend a cooperative and conservative approach to dealing with DDTC or BIS when an exporter’s actions could be found to be a violation of the ITAR or EAR.  This usually results in a Voluntary Disclosure.  Some exporters may want to know about their rights before DDTC and BIS, what their options are if they disagree with DDTC or BIS on whether there was a violation, or whether they should take their chances and not disclose possible violations.  This article explains how the Administrative Procedure Act (APA) leaves exporters with few options, discourages exporters from challenging DDTC or BIS actions, and makes risky strategies all the more risky.

I want to illustrate the problem by pointing to provisions in the ITAR that can pose challenges for exporters.  For example, the ITAR allows DDTC to designate certain articles as defense articles and thus subject to approval from DDTC if the article is “specially designed” for military application, which is defined as follows:

“As a result of development, has properties peculiarly responsible for achieving or exceeding the controlled performance levels, characteristics, or functions described in the relevant U.S. Munitions List paragraph”

While the “specially designed” definition in the ITAR is a vast improvement on the “specifically designed” terminology that previously littered the ITAR, exporters will probably still find it challenging knowing whether an item “has properties ‘peculiarly’ responsible for achieving or exceeding controlled performance levels, characteristics, or functions.”  Although most exporters will probably not have a clear idea exactly what this definition and other equally vague provisions entail, exporters will differ in how they manage these interpretive challenges.  Some exporters will seek an interpretive ruling or Commodity Jurisdiction request from DDTC before exporting an article that may be specially designed, others may submit a voluntary disclosure for possible past violations once they finally figure out the correct application, while others may take a reactive approach and only deal with the problem if and when they get in trouble with DDTC.  This final strategy is, to put it bluntly, a really bad one.

One of the principle reasons why companies need to be proactive rather than reactive is because, unlike most administrative agencies, DDTC and BIS actions are hardly ever reviewable by a federal court.  This means that DDTC and BIS are your final judge and jury and you will, in all likelihood, be unable to challenge DDTC’s interpretation in a court of law.  To stack more chips against exporters, DDTC and BIS can restrict exporters from conducting any exporting activities while an administrative review is pending.  This has effectively resulted in almost no challenges of DDTC or BIS action beyond the preliminary stages of the administrative enforcement process.

DDTC and BIS actions are non-reviewable in most cases due to an exemption for which these agencies qualify under the APA.  The APA is a boon for most citizens dealing with administrative agencies, as it creates certain due process rights to protect citizens from overreaching actions taken by administrative agencies.  Because of this, the APA has been coined an administrative law “bill of rights.”  One important right guarantee by the APA, is the right to appeal administrative actions that are “arbitrary and capricious, an abuse of discretion, or otherwise not in accordance with the law” directly to a US Federal court.

This would all be good news for exporters who have a bone to pick with DDTC and BIS except that DDTC and BIS are engaged in “foreign affairs functions”, which are explicitly exempted from many of the procedural requirements of the APA.  The ITAR reaffirms this exemption in 22 CFR § 128.1:

With that said, the ITAR and EAR both generously provide some process through which one might challenge administrative actions.  For instance, the ITAR allows those charged with a violation an opportunity to respond to the charging letter in front of an Administrative Law Judge.  Significantly, this judge is appointed by the Department of State.  Additionally, the conclusions of the Administrative Law Judge can be appealed to the Under Secretary of State for Arms Control and International Security on the grounds that:

1) The findings of a violation are not supported by any substantial evidence;
2) A prejudicial error of law was committed; or
3) The provisions of the order are arbitrary, capricious, or an abuse of discretion.

However, whatever benefits are provided by the ITAR in terms of an administrative review process are overshadowed by the fact that during this administrative appeals process, DDTC can suspend your exporting privileges and the decision of the Administrative Law Judge stays in place.  This discretion has struck enough fear in most exporters that no exporter has attempted to challenge DDTC through the appeals process provided in the ITAR.

While challenges to DDTC and BIS actions may be futile, both agencies have high regard for proactive, cooperative companies, even when violations are committed.  Exporters can demonstrate their commitment to export control by taking a conservative approach that emphasizes deference to the goals and interpretations of DDTC and BIS.  When in doubt, commodity jurisdiction requests, requests for interpretive rulings, and Voluntary Disclosures are all important ways in which an exporter can cooperate with DDTC and BIS and prevent violations.  As this article has highlighted, exporters have few other options.