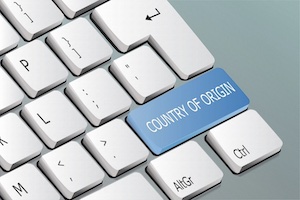 Country of origin of imported merchandise is a cornerstone enforcement area for Customs & Border Protection (“CBP” or “Customs”) and is the accurate tracing of the country of origin of goods and materials across multiple countries and is a crucial aspect of maintaining a compliant global supply chain. Recently, CBP has requested information from importers in the form of a Customs Form-28 (“CF-28”) that asks for additional documentation that demonstrates proof of the origin declared. Sometimes, the CF-28s will mention that the inquiry is related to the assessment of Antidumping/Countervailing Duties or Section duties, but others are not so specific. The truth is that the origin of a good can determine the applicability of a variety of enforcement actions, including section tariffs, Antidumping/Countervailing Duties, import bans or quotas, preferential treatment under free trade agreements, or the Generalized System of Preferences, and more.

Regardless of the matter cited on the request for information, one of CBP’s top enforcement priorities is enforcing Antidumping/Countervailing Duties and Section 301 Duties, especially when CBP suspects transshipment to evade duties. Many of the recent EAPA Evasion cases have dealt with transshipment of Chinese-origin goods through Southeast Asian countries like Malaysia and Thailand to evade Antidumping/Countervailing Duties. Additionally, the recent Uyghur Forced Labor Prevention Act, which bans the importation of all goods made in the Xinjiang Uyghur Autonomous Region (“XUAR”) in China,  including products made from raw materials and inputs from the region. An inquiry into the origin of merchandise should be a red flag to importers as a sign that CBP could be motivated by one of these enforcement areas.

When CBP requests verification of origin through CF-28s, the import specialists are focused on a number of issues in addition to origin declaration, including Antidumping/Countervailing Duties, Section Duties, marking, and forced labor concerns. Some of the more invasive CF-28s regarding origin have asked for the following evidence:

If CBP is not satisfied with the documentation, it can reliquidate the entry with a different origin through a Form-29 (“CF-29”). In that case, the importer will be liable for any duties that apply to merchandise under the new origin. CBP can also use this CF-29 to liquidate all future entries of the same products with the different origin. To fight this new origin determination, the importer would have to protest the entries.

However, if the importer receives a letter of investigation regarding the origin of their merchandise, there is a greater burden for documentation to prove the declared origin and less opportunity to mitigate the harmful impacts of an adverse origin determination by Customs. For example, during an evasion investigation, CBP will attempt to verify the origin of the merchandise under investigation pursuant to 19 C.F.R. Part 165. This verification requires the importer to produce documents related to the foreign supplier’s production capacity, including calculations based on machinery, equipment, and number of employees. In previous investigations, CBP has requested the following types of information:

It is not customary practice for importers to keep this kind of detailed documentation for each shipment, and some of this information can be extremely difficult to obtain. In light of recent enforcement developments from CBP, importers should start vetting their foreign suppliers with more scrutiny by requesting additional documentation and verifying the capacity of the foreign supplier with photos and testimony of individuals. If a company receives a CF-28 regarding the country of origin of its goods, it should conduct a detailed internal review of its entries and should consider the benefits of a prior disclosure with CBP to shield itself from the potential penalties that could result from an investigation. Should a company receive a letter of investigation, it should consider contacting outside Customs and Trade Counsel immediately.