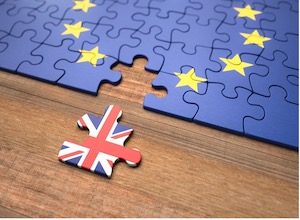 On December 24, 2020, the United Kingdom (“UK”) and the European Union (“EU”) concluded the EU-UK Trade and Cooperation Agreement (“TCA”) which came into force on January 1, 2021. While the UK was in the EU, trade between the two blocs was governed by the EU’s Single Market and Customs Union rules. In essence, this free movement standard allowed goods and services to travel between the UK and EU without customs checks or other border formalities. However, that scenario has now changed, and the UK has left the EU’s Customs Union causing the once “free flowing” trade in goods between the two blocs to be subjected to customs controls (i.e., security and safety declarations).

Under the UK-EU agreement, originating goods only will benefit from the liberalized market access if they satisfy the new rules of origin requirements. The TCA contains rules of origin provisions, requiring that tariff-free status be conferred only on goods with a certain percentage of parts made locally. If a large part of a good manufactured in the UK comes from a third country—Vietnam, for example—it is subjected to the World Trade Organization (“WTO”) tariff schedule for that specific country.

Under the TCA, goods are generally regarded as being either of EU or UK origin where:

• They have been wholly obtained in either the EU or the UK (e.g., mineral products from the EU/UK).
• They have been produced exclusively from originating materials (e.g., butter produced in the EU from EU milk).
• The goods have been produced in the EU or UK incorporating non-originating materials, provided they satisfy the requirements set out in TCA ANNEX ORIG-2 (product-specific rules of origin).

As with all FTAs, the EU-UK TCA seeks to encourage maximum sourcing within the FTA. However, the agreement does not address the fact that UK and EU are modern advanced economies relying on complex cross-border supply chains to work efficiently. Companies impacted by these new procedures are experiencing significant additional administrative burdens, depending on the complexity of their supply chains. This new bureaucracy, combined with the devastating effects of the Covid-19 pandemic, is leading to the start of the post-Brexit era. Trade between the United Kingdom and the European Union dropped substantially in the first month following the U.K.’s exit from the EU. According to trade data from the U.K.’s Office for National Statistics, exports to the EU fell by more than 40% in the first month of 2021, and imports from the EU to the U.K. fell by nearly 29%.

The solution can be in the new FTAs that the UK is negotiating with different allies. These FTAs will increase UK trade potential and will help mitigate the damage to its domestic economy during this transitional period. The UK’s trade strategy seems to be a focus on negotiating bilateral trade deals with the Asia-Pacific region, but without forgetting other strategic Central America partners. On December 15, 2020, the Mexico and UK Governments signed the UK-Mexico Trade Continuity Agreement. The purpose of this Continuity Agreement is to avoid the imposition of the WTO´s most favored nation tariffs as a default measure, that would otherwise have become applicable after December 31st, 2020 when the European Union-Mexico Global Agreement stopped applying in the UK. A month later, on January 31, 2021, the UK government announced it would apply to join a Comprehensive and Progressive Agreement for Trans-Pacific Partnership (“CPTPP”). The UK’s application to join this trading bloc has been well-received so far. Both domestic UK businesses and the other CPTPP members have broadly welcomed the partnership after seeing opportunities to deepen global trade links and open new channels of commerce due to the UK’s geographical location.

From the U.S. perspective, as the UK continues to conclude other trade agreements, U.S. businesses will lose competitive advantages in UK markets in the absence of the US-UK FTA. This is something that the new administration will have to address soon. Back in 2018, the Trump Administration notified Congress, under Trade Promotion Authority (“TPA”), of its intent to enter comprehensive FTA negotiations with the UK. The United States and UK conducted five rounds of negotiations in 2020, but the pandemic and the US elections stopped the process. The negotiations remain pending, and it is uncertain how the Biden Administration will continue with the trade negotiations and what strategy they will use. To be considered under the current TPA, an agreement must be concluded by July 1, 2021. What is clear to the EU is that the next few months will be key to understanding the future of the trade relations between the UK and the EU.

Brexit is a process, not an event, and it will take time for most of the benefits of separation from the EU to feed through. It has been just over two months since the TCA came into force and both the UK and EU markets are still very much adapting to the realities of Brexit, and no doubt, as with any FTA, further issues will arise.